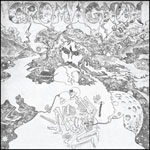 It would be a travesty of justice to suggest--as some critics have--that there is only one stand-out track on this historic reissue of Cromagnon's only full-length release, Cave Rock. That track is “Caledonia," which is no doubt a magnificent song. For almost four-and-a-half minutes, the inner ear is treated to a priceless amalgam of Celtic music: the moaning bagpipes, dark and throbbing electric guitars, and relentlessly militaristic drums came together in a song that was so far ahead of its ...