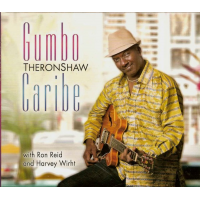 Theron Shaw is well known in local music circles as the go-to man for guitar support ranging from jazz to calypso. His two previous releases signalled a willingness to engage with native cultural mores and tackle Caribbean Jazz not only as a way to “tropicalise" harmonically complex original music, but as a way to validate and valorise calypsoes, ethnic music and folk songs in a surprisingly new context. With his third release on CD, Gumbo Caribe, Shaw almost exclusively utilises ...