Association for the Advancement of Creative Musicians (1966 - 1969)

As hard bop was running out of steam and rock & roll was becoming the music of choice for the younger audience, many musicians were building on the innovations of Ornette Coleman, Cecil Taylor and John Coltrane, creating a new approach to jazz—Free Jazz (after Coleman's 1960 release of the same name) or, simply, the avant-garde. For solidarity in the face of limited venues for performance and indifferent audiences, creative musicians in Chicago banded together to found the Association for ... 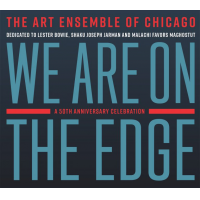 Bassist Malachi Favors, trumpeter Lester Bowie and saxophonist Joseph Jarman have all passed on, leaving the Art Ensemble of Chicago's remaining original members, saxophonist Roscoe Mitchell and drummer Famoudou Don Moye, to rebuild. We Are on the Edge is a double-CD package; it is a fifty-year celebration of the group, and a dedication to the departed members of the seminal offshoot of the Association for the Advancement of Creative Musicians (AACM). It is not a project that bears a clear ...

Seventy plus recordings and fifty years since the inception of The Art Ensemble Of Chicago. I mean the Roscoe Mitchell Art Ensemble, its original name. Born of Chicago's Association for the Advancement of Creative Musicians (AACM), the band sojourned to Paris and soon changed its name to The Art Ensemble Of Chicago to reflect the corroborative process of its members. With the move an enduring quintet was formed with Mitchell, Famoudou Don Moye, Lester Bowie, Malachi Favors, and Joseph Jarman. ...

Part 1 | Part 2 | Part 3 | Part 4 It was late in the evening when Cory left the club. As always, he quickly became exhausted when he left the stage. It was not playing that was difficult. He was comfortable in his own skin on stage and often felt a real connection with the audience. It was a transient feeling and he could not catch everyone, but he played for someone and those who heard ...

The Art Ensemble of Chicago were, as expected, one of the main attractions at Time in Jazz, the Festival organized for the thirtieth consecutive year by Italian trumpet player Paolo Fresu in his native city of Berchidda, in Sardinia. The line-up of the AEoC, which played a fiery set, featured the founding members Roscoe Mitchell on reeds and Famoudou Don Moye on drums and percussions, as well as Hugh Ragin on trumpet and Junius Paul on bass who ...

They formed, of course, in the American city that constitutes part of their band moniker. But this 1970 album by the Art Ensemble Of Chicago, re-released on Soul Jazz, was in fact recorded in Paris, the four main AEOC members having formed part of the late '60s exodus that also brought to France Archie Shepp, Don Cherry and Anthony Braxton.

The location is significant because Les Stances A Sophie--a soundtrack for a 1971 New Wave film of the same title, ...