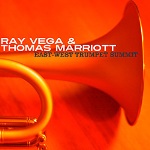 East-West Trumpet Summit is a rollicking showcase for longtime friends Ray Vega and Thomas Marriott. Vega, a New York native and the elder of the two, has served for many years as a mentor to Seattle's Marriott. The two first met when Marriott was a student at the University of Washington in Seattle, and Vega was in town touring with the late Tito Puente. Friends ever since, the two trumpeters share an affinity for hard-blowing, grounded-in-bebop jazz. New York pianist ...

It's usually a bad thing to review a musician's live show and not own at least one of his records. Especially when his discography as a sideman is easily accessible in most record shops. Unfortunately, I do admit this was the case for myself in going to review Ray Vega's Latin Jazz Quintet at the Kennedy Center's KC Jazz Club. Luckily the following day, his publicist sent me his most recent record on Palmetto Records, and since the show I ...

Trumpeter Ray Vega is a triumphant example of a musician liberated rather than straightjacketed by his Latin jazz expertise. Years of playing in bands as notable as Tito Puente's and Mongo Santamaria's clearly have reaped rewards in terms of his bright, rhythmically punchy, powerhouse delivery. Vega's own description of his current style as “Latin Bop" accurately describes his second disc as a leader on Palmetto. The bow to bop is made perfectly clear by his covers of Wayne ...

On Boperation, his second release for Concord Picante, Ray Vega pays homage to the pantheon of legendary bop trumpeters from Diz to Brownie, Fats to Miles — and does so with an invigorating Latin twist. In most cases, the songs chosen were not only played by the trumpeters in question but written by them as well. The exceptions are Benny Golson’s “Whisper Not” (for Art Farmer), Gigi Gryce’s “Social Call” (for Donald Byrd) and the standard “Tangerine” (for Chet Baker ...

Viva La Musica. Pregnant with percussion, Boperation is a standards light beam passed through a Latin prism. The result is an infectious salsa slant on hallowed music ably directed by trumpeter Ray Vega. Vega chooses carefully songs composed by ostensibly his greatest influences if not those he recognizes for the necessary artists the are (were). His tone is at once Miles, Birks, and Clifford. Oh, how brilliant and what a start to hear, like a dream where you talk on ...

Before Boperation, trumpeter Ray Vega's second Concord Picante disc as a leader, I knew nothing about the man or his music. But my inattention or inappropriate disregard shifted dramatically within the first few notes of this disc. Even if you've known all along about Ray's previous self-titled disc - or his higher profile work with Tito Puente, Mongo Santamaria, Joe Henderson's big band or the Bronx Horns - Boperation grabs your ears and holds on.Here, the 38-year-old South ...