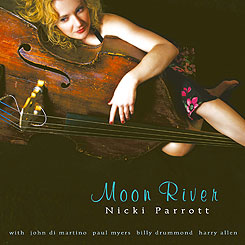 It seems, according to some unwritten rule, that most female jazz instrumentalists sooner or later record a vocal album or two. Unfortunately, on these recordings, often passable vocal skills take precedence over superior instrumental talent. Perhaps this is intended to meet the demands of the commercial market, with bassist Nicki Parrott's Moon River a prime example. From the sexy cover photo to the listing of all the songs' lyrics in the booklet (all except one are well-known jazz standards), to ...

Japan's appetite for American jazz is ever increasing and their Venus Records has been releasing new material from mainstream artists that is attractively packaged and superbly recorded. Included in their catalog is Moon River, bassist/vocalist Nicki Parrott's debut as a leader. Much in demand as a bassist, Parrott has developed a uniquely emotive style that is adaptable to a number of genres but in all cases her sensitive touch is what sets her apart. Her recent foray ...

With People Will Say We're In Love, bassist Nicki Parrott and pianist Rossano Sportiello have stepped to the forefront and formed a musical partnership that keeps the melody squarely in focus while creating an atmosphere of intimate instrumental interplay. Both musicians are well known for their individual talents from previous dates. Sportiello's solo piano release, Heart And Soul (Arbors, 2006), ...