There always seem to be albums coming out that pay tribute to accomplished jazz composers. Here are some newer ones, three on very familiar names and one on an often overlooked musician. John Di Martino Passion Flower: The Music of Billy Strayhorn Sunnyside Records 2020 Pianist John Di Martino leads a tribute to the work of Billy Strayhorn that captures the composer's sense of elegance and playfulness. A lot of that ...

Composer / arranger Billy Strayhorn was barely twenty-three years old when he first met bandleader Duke Ellington, an encounter that would lead to a collaboration that lasted more than half of Strayhorn's life. During that time, Strayhorn wrote some of the Ellington orchestra's most acclaimed and enduring songs including “Lotus Blossom," “Chelsea Bridge," “Isfahan" and, most notably, the jazz classic “Take the 'A' Train," as well as others for which Ellington claimed partial credit ("Daydream," “Something to Live For") and ...

When esophageal cancer took Billy Strayhorn's life in 1967, his work and legacy rested squarely in the shadow of Duke Ellington's world. More than half a century later, though the two figures remain inextricably linked, Strayhorn's genius has moved past the penumbra of his legendary collaborator and employer, occupying its own clear place in the jazz firmament. Through biography and documentary film, his own lush life has been illuminated. And of equal importance, Strayhorn's compositions continue to bloom in others' ...

John di Martino is a New York area based pianist, composer, arranger and Venus recording artist. He is a sought after musical director and is in demand by many singers as an accompanist, having accompanied such singers as Jon Hendricks, Sylvia Sims, Diane Schuur and Billy Eckstine. His talents as a pianist and arranger can be heard on recordings with Freddy Cole, Gloria Lynne and Grady Tate. Noted for his versatility, di Martino has also performed and recorded with such ... 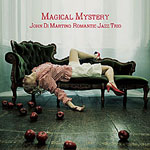 The music of Thelonious Monk has long fascinated jazz musicians for its many challenges, including lines that are simultaneously dissonant yet accessible, plus the sudden changes thrust upon them. Pianist John Di Martino's Romantic Jazz Trio has a conventional ...

The trio setting leaves no place for a pianist to hide. A strong rhythm section may make up for a weak left hand, but unless the leader chooses an interesting program and carries his improvisational weight, all is for naught. These three pianists challenge listeners with their song selection and arrangements. Russ Kassoff Somewhere RHK Jazz 2006 Russ Kassoff has an extensive resumé backing singers (Frank Sinatra, Liza ... 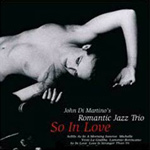 The versatile pianist John DiMartino has made a name for himself as a sideman in Latin jazz bands and as an accompanist for vocalists, but has yet to be justly acknowledged for his abilities as the leader of a straight-ahead instrumental jazz group. On his second “Romantic Jazz Trio" date for the Japanese Venus label, Di Martino overcomes the limitations of a “sentimental" program directive and proves that he is certainly a “talent deserving wider recognition."

Schooled in harmony with ...