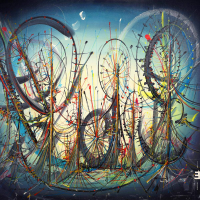 The overture to Fairgrounds, “Grounds Entrance," involves an engaging percussive soundscape leading into “Yeah Pete!," which despite its exclamatory title is a laid-back feast of drums, electric piano and guitar on a similar wavelength to Miles Davis' In A Silent Way (Columbia, 1969). But “The Man's Gone" introduces a funky shift with irrepressibly upbeat wah-wah guitar from the redoubtable Lionel Loueke. At nearly three minutes into the song, Loueke's guitar goes nuclear for around half a minute, clearly signalling that ... 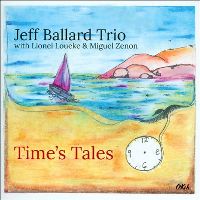 World-class drummer Jeff Ballard (Chick Corea's New Trio, Brad Mehldau Trio) goes above and beyond the call of duty on his first album as a leader. Celebrated for his modern jazz drumming, spanning bop and the outside spectrum, he expands his wares on this eventful trio release by flawlessly engineering a consortium of high-spirited pieces. With Ballard's esteemed associates, saxophonist Miguel Zenon and guitarist Lionel Loueke, they frame the jazz idiom on Afro-Cuban, Caribbean, classical and other stylistic genre-hopping forums. ...

Drummer Jeff Ballard sure knows how to pick his playmates. In drafting one-of-a-kind guitarist Lionel Loueke and the focused-yet-irrepressible Miguel Zenon on saxophone, Ballard managed to create the most exciting trio to emerge in recent memory. While this album is Ballard's long-awaited leader debut, it's more tempting to dub it a leaderless or leader-heavy date. Yes, Ballard is technically at the helm, but a collective sense of music making is in the air and each man is ...

For several decades Jeff Ballard has been the first call drummer for a host of contemporary jazz's biggest names, notably pianist Brad Mehldau, with whom Ballard has played since 2005. Of late, however, Ballard has gone it alone. The 2013 debut shows of his quartet Fairgrounds, featuring electronics musician/bassist Reid Anderson, pianist Tigran Hamasyan and guitarist Lionel Loueke suggested Ballard's desire for greater compositional freedom and experimentation. The Jeff Ballard Trio's debut recording, on the other hand, is a fairly ...

[ Editor's Note: The following interview is reprinted from George Colligan's blog, Jazztruth] I recently did some teaching in the U.K. at the Birmingham Conservatoire; I was the lone guest clinician/guest performer. Last year, roughly around the same time of year, I teamed up with drumming great Jeff Ballard. I had kind of forgotten that I had recorded an interview with him. So it's over a year late, but hopefully my jazztruth readers will forgive me.

Jeff Ballard FairgroundsPavilion TheatreDun Laoghaire, IrelandJuly 10, 2013Fairgrounds is as good a name as any for drummer Jeff Ballard's new band. The best fairgrounds are places that take you away from everyday humdrum and transport you temporarily to an alternative world where fun, the curious and outlandish, and adrenalin rushes are all part of the continuum. Not all the rides and stalls will appeal universally, but on balance who doesn't have a good time at ...

Jeff Ballard: A Life In Music

For some jazz musicians, it seems as though they explode onto the scene virtually from the first day they pick up their instrument, and then proceed to land a huge name gig and the rest is history (or they are, after their 15 minutes). Other musicians spend a lifetime building and honing their craft. One gig leads to the next, one experience preparing them for the following one. Such is the case for master drummer Jeff Ballard.Ballard's gigs ...