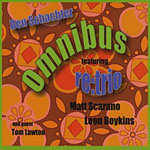 Saxophonist Ben Schachter is a jazz master, well known in the Philadelphia area and beyond. On this outstanding CD, he and his cohorts go beyond playing their instruments to creating works of art. Each piece forms a coherent composition where improvisations come close to sounding like the interpretation of a written score. Heartfelt yet profoundly intellectual, each consists of a fully developed means of expression while creating a mood--often a blue mood--all its own. 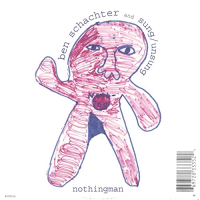 Philadelphia-area saxophonist Ben Schachter plays a wide range of reed instruments extremely well, although his primary voice is the tenor saxophone. He's been influenced by Sonny Rollins and John Coltrane, yet his burly tenor sound is clearly his own, and his approach is both original and personal. If the music on his self-produced Nothingman is any indication, Schachter deserves to be much better known.

Sung/Unsung is the name of Schachter's current band, which pivots on the interplay between Schachter and ...

With a sharp edge that cuts on the side of dynamic playing and improvisation, Nothingman is the latest release by reedist and bandleader Ben Schachter. The Philadelphia-based musician has earned a reputation as one who treads clear of tepid jazz waters in favor of progressive and free flowing ones, as attested on his recent recordings Inside, Looking Out and Missing Beloved.

Schachter's new group Sung/Unsung is appropriately titled as he joined by highly accomplished (if not widely known) musicians--bassist Matthew ...

He’s wowed critics and clubgoers, won fellowships and magazine polls. He’s recorded two CDs as a leader and has two more on the way.

But like so many jazz musicians before him, Philly-area tenor saxophonist and composer Ben Schachter has yet to land a contract with a major record label.

It hasn’t stopped him.

Told he should move to New York to break into jazz’s big leagues, Schachter, a Philadelphia native, stayed put. No bites from the major labels? Schachter ...

If the news hasn’t reached you, then listen up! Philadelphia-based saxophonist Ben Schachter is one of the sharpest improvisers in modern jazz. Primarily due to his “Trio of Many" band featuring bassist Micah Jones and drummer Erik Johnson. Here, Schachter enhances his trio with perennial all-stars, saxophonist Gary Bartz, guitarist Jef Lee Johnson, and trumpeter Tim Hagans. With the piece titled “Visitation,” Schachter (tenor sax) soars into the stratosphere via a series of torrid hard bop lines. Hagans follows while ...

Ben Schachter: Trio of Many

Philadelphia, Pa. has been producing fine prizefighters, jazz musicians, and scrumptious cheesesteaks for years! And while we focus our attention to the arts, saxophonist/composer/educator Ben Schachter represents yet another impressive exponent of Philly’s long standing lineage of musicians who often possess signature sounds and styles. - A characteristic which is significant when considering the glut of CDs being released by folks with marginal talent, who can afford a medium priced digital mixer/recorder, a few decent mic’s and do-it-yourself mastering software. ...