Any musiclover who enjoys the sensation of immersion in a maelstrom of sound will no doubt relish Mikrojazz, especially those familiar with the work of guitarist Dave Fiuczynski. But even listeners who fear the abstract somewhat should find much to savor here because this five-piece band, including 'The Fuze" and co-led with Philipp Gershlauer, moves in and out of such realms throughout a dozen tracks. Every group of musicians requires a catalyst in order to function with the ...

If you've followed guitarist David Fiuczynski's work in recent years, then you should already know that he's continually intensifying his search for what exists in the spaces between the spaces. While Fuze has always registered as something of a non-conformist, he's now completely shed a layer of skin and left conventional Western musical tuning behind, evolving into a microtonal guru working with a uniquely non-patternistic patois. Through his teaching at Berklee, and with albums like Planet MicroJam ...

[ Editor's Note: The following interview is reprinted from George Colligan's blog, Jazztruth] David Fiuczynski is a very unique guitarist. Many of you know him from his successful band called Screaming Headless Torsos. He's played with Hasidic New Wave, trumpeter Cuong Vu, and pianist Hiromi. I first met David at a rehearsal with drummer Billy Hart, and then we played a few projects with clarinetist Don Byron over the years. We've been working together in Jack DeJohnette's band ...

David Fiuczynski: In the In Between

The most recent compositional premiere by guitarist David Fiucyznski has a title that almost manages to sum up his entire sphere of influence. “Flam! Pan-Asian Microjam for J Dilla and Olivier Messiaen" premiered at Berklee College of Music in 2012 and was inspired by a geographically and temporally enormous range of styles. Fiuczynski describes the piece as a trinity of inspirations with respect to rhythm, harmony and melody.“It's kind of a triangle between Pan-Asian music, Messiaen bird calls ...

David “Fuze" Fiuczynski continues to obliterate the boundaries of modern-day electric guitar styles, pushing himself further forward into the “world" sounds, techniques, scales, and rhythms that now constitute his calling-card. Funk can be 4/4 or 11/8, tone distorted or bone dry, chords root-fifth crunchers or undeniably undecipherable . He can make a fretted guitar sound fretless, but he's also the world's foremost fretless guitarist, rendering him one of the world's premier slide guitarists--but he plays “slide" with his fingertips. All ...

Completing the Current Circuit with Fuze

Guitarist David “Fuze" Fiuczynski has remained somewhat of an incongruously well-kept secret despite his staggeringly complete resume, forward-thinking conceptual approach, and absolutely spine-chilling command of guitar technique. He's also been ahead of the curve on a few things; for one, the funk-metal crossover stylings that have dominated the popular music airwaves for quite some time now. His Screaming Headless Torsos were pumping fresh air into this genre back in 1995 with a major label studio release, and the previously import-only ... 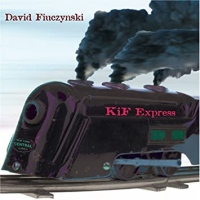 The country of Morocco is respected throughout Europe for, among other things, an estimated 30% of the continent's marijuana imports. The superior raw material called Kif is found there in the mountains of Rif. In Arabic, it's spelled ÙƒÙŠÙ. Okay, got that? Enough said.

But don't go into Kif, the record, thinking it's some sort of stoner jam-band excursion. Quite the opposite: guitarist David Fiuczynski and cellist Rufus Cappadocia apply a razor edge to these pieces, asserting a ...