[For Tammi Tam.] Somewhere change is jingling, there is an accordion moaning softly in some corner somewhere, a barstool is creaking--somewhere foul glasses are being grimly emptied... The dark eerie carnival is rising once more--hurry your children into safe dreams, lock the wine cabinet; tuck your long-lost sweethearts into forgettance. Tom Waits is here, those sub-human genius features are sizing you up, asking you how your night's been; he's pouring himself a drink (he doesn't ask). ... 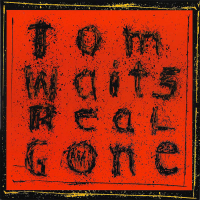 With each successive album, Tom Waits has become harder to pin down. He is unorthodox and approaches things differently; he is strange, and as a result of that his music is strange, different and unorthodox. His last two (simultaneously released) albums ( Alice and Blood Money ) contained pieces specifically written for the theatre and found him in a distinctly theatrical (Brechtian) mode. Real Gone is Waits's most vital album in twelve years as he moves away from the feel ...

Tom Waits is unlike any singer/songwriter before or since he burst on the scene with Closing Time in 1973. His music has always been original and eclectic, guiding his audience along an evolution from drunken skid row crooner to his present role as western music's deconstruction magician. Throughout a catalogue that spans thirty plus years of gushing genius, jazz has always been a foundation for much of Waits' ...