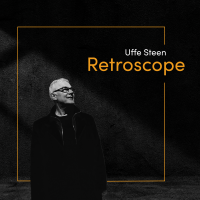 Every once in a while it happens. You never know when. You never who its going to be. Listening to a lot of music increases the odds. Still, one can go a stretch before experiencing that “moment." Hats off to Danish guitarist Uffe Steen for providing such a treat for the ear and for the human psyche. Retroscope is the latest project from the veteran blues/jazz/why put a label on it, left-handed guitarist (he plays a right-handed guitar ...

Guitarist Uffe Steen is one unmelancholy Dane. If that sounds like a left–handed compliment, well, he does play left–handed. And does he ever Play! Bluesy cascades of sound, single–note or chordal, fly off his fretboard like squadrons of worker bees beaming in on one’s verdant flower garden. This concert performance in Aarhus catches Steen’s trio (bassist Lennart Ginman, American drummer Adam Nussbaum) on a very good night (not that they have any bad ones, but there’s always that chance). There’s ...

Uffe Steen, the 47-year-old Danish guitarist, rips it up on this new live record, culled from three European performances in mid-September of last year. Steen is joined by his countryman Lennart Ginman on double bass and none other than Adam Nussbaum on drums. Nussbaum, of course, has logged many hours backing major American axemen like Mike Stern, John Scofield, and John Abercrombie. While Steen has much in common with these rock-influenced heavy hitters, he really doesn’t sound like them at ...