Jazz Orchestra of the Concertgebouw: Crossroads 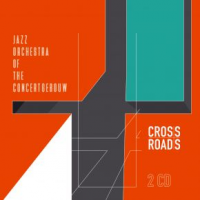 The Netherlands's Jazz Orchestra of the Concertgebouw, which started life in 1996 as the New Concert Big Band, a successor to such leading lights as Count Basie and Woody Herman, has evolved since then into an up-to-date ensemble that more closely resembles New York's Vanguard Jazz Orchestra or composer Bill Holman's legendary West Coast rehearsal band. On its two-CD set Crossroads, the JOC showcases compositions and arrangements by members of the orchestra, with disc one conducted by an American, drummer ...