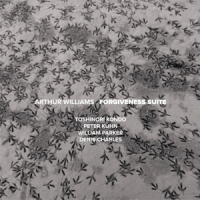 Forgiveness Suite belatedly constitutes trumpeter Arthur Williams' first leadership date. A mysterious and troubled soul who flew below the radar, even within free jazz circles, Williams surfaced on a handful of albums in the 1970s and 80s before dropping from view not long after. His most notable appearances are documented on saxophonist Frank Lowe's Lowe And Behold (Musicworks, 1977) Jemeel Moondoc's Muntu Recordings (2009), William Parker's Centering: Unreleased Early Recordings 1976-1987 (2012) box set and Peter Kuhn's Livin' Right, reissued ...

Arthur Williams and the Bluesmasters: Harpin' On It

Here's a danceable, soulful blast of harmonica-driven blues from Arthur Williams and the Bluesmasters. Harpin' On It offers up a succession of jumpin', jukin' tunes that showcase the leader's funky harmonica and all-out vocals. Factor in Bob Lohr's fast-pumping piano, and the boogie really burns on this one.Born in Mississippi, 61-year-old Arthur Wilson was tutored by Little Walter and played with Chicago blues legends Elmore James and Muddy Waters. Williams returned to the Delta in the late '50s ...