The Jiggs Whigham International Trio: Live At Nighttown: 'Not So Standards' 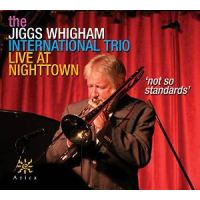 A jazz trio performing songs like “Autumn Leaves" and “Days Of Wine And Roses" isn't exactly out of the ordinary, but this trio performing those songs is something else. Live At Nighttown: 'Not So Standards' finds Jiggs Whigham, an American trombone giant who expatriated to Germany long ago, back at home in Cleveland, Ohio, putting on a standards-heavy show. But don't let the playlist fool you. These aren't paint-by-numbers takes on old favorites. The Jiggs Whigham International Trio--Whigham, German pianist ...

One great composer, two wonderful musicians, ten memorable songs — a fabulous idea on paper, but one in which the ingredients are sometimes tastier than the meal. Not that trombonist Jiggs Whigham and guitarist Gene Bertoncini are a less than charming and accomplished duo; on the contrary, they perform the songs of Hoagy Carmichael with an abundance of “heart and soul” (on that tune and elsewhere). But fifty–eight minutes of trombone and guitar, no matter how well–played, can become wearisome ...

Jiggs Whigham with the Netherlands Metropole Orchestra: Love Walked In

Although he was born in the U.S., trombonist Jiggs Whigham’s name is far better known to Jazz enthusiasts overseas, especially in Europe, than it is to those in his native country. That’s because Whigham has lived abroad since 1965 when he went to Cologne, Germany, to join the Kurt Edelhagen Orchestra. To say that the Ohio native’s reputation has flourished there would be an understatement, as he is one of the most respected players, composers, conductors and educators on the ...