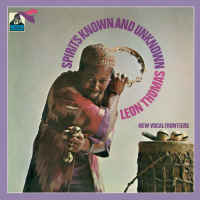 Spiritual-jazz fans in London have had a good 2019. The music looms large in several of the most prominent bands on the city's happening woke jazz scene. On top of that, London's Gearbox Records released Mothership, an on-point album by singer Dwight Trible, who also played a memorable one-nighter at Ronnie Scott's club. Trible is a stylistic descendant of spiritual-jazz auteur Leon Thomas, who created the genre's vocal strand while studying and performing with pianist Horace Tapscott's ...

One of the many promising vocalists who followed Joe Williams in the 1960's Count Basie band (Bill Henderson, O. C. Smith, Irene Reid, and Richard Boone were others.), Leon Thomas more than lived up to his promise. He is most noted for his yodeling (He substituted it for scat and gave it deeper meaning than scat.), but he was rock solid blues at bottom. His music referenced the social upheaval of the 1960's -70's, but because of his artistry and ...