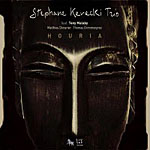 Houria is an intriguing mix of composition and improvisation, of North African and Western music, of the modern and the classical, and of Europe and North America. Bassist Stephane Kerecki leads this trio of French musicians, augmented by New York-based reeds player Tony Malaby, through twelve original tunes, and an arrangement of Olivier Messiaen's “O Sacrum Convivium, which are characterized by thoughtful and considered playing. “Houria" bears the most obvious stamp of Kerecki's North African influences--it's an ...

It is one thing to make music of limpid beauty, another to make music of high-tensile muscularity. It is something else again to combine both qualities in such a way that each enhances the other. But that is what the French bassist and composer Stephane Kerecki has done with the third album by his trio, augmented for the occasion by ...