Michel Petrucciani celebrated life. It was a short one (he died when he was 36 of a pulmonary infection), but he lived it to the brim. Jazz was his passion, which he shared through his numerous recordings and concerts. He also had a sense of humor that could be zany and irreverent.

Petrucciani is the focus of the documentary Non-Stop ...

Michel Petrucciani left his mark on straight-ahead jazz. This compilation from previous albums demonstrates clearly that the pianist was in command when he explored the realm, both as a gentle balladeer and as a swinging musician who worked hard at his craft and connected well with a great number of like-minded artists in the jazz community.

The albums represented on this compilation were recorded between 1992 and ’98. It was in the wee hours of Wednesday morning, ...

Bill Evans wrote in the liner notes for his Grammy Award-winning album Alone that “to understand music most profoundly one only has to be listening well." If you listen to an Evans album and follow it with So What, you will understand well that Evans' music lived in the small but profound hands of Michel Petrucciani.

So What is a recorded odyssey of Petrucciani's work on Dreyfus Jazz; a compilation that shows a well-seasoned jazz pianist playing beautifully in the ...

Released in memory of pianist/composer Michel Petrucciani, So What presents a comprehensive introduction and carefully constructed homage to Petrucciani’s many musical sides.

Afflicted with ontogenesis imperfecta, a bone disorder, Petrucciani found his accomplished career cut short by a pulmonary infection when he was only thirty-six. He showed an early aptitude and interest in music, and he was already drawn to the piano by age four. Fostering these early signs of great talent, Petrucciani’s parents provided a classical training, but he ... 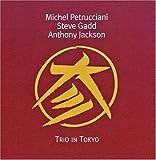 Recorded in 1997, this CD features the late Michel Petrucciani on piano, drummer extraordinaire Steve Gadd and bassist Anthony Jackson in a performance from the Blue Note in Tokyo.

One listen to Trio In Tokyo and it is apparent that this is Petrucciani's group. The diminutive pianist leads while Gadd and Jackson provide a killer rhythm section. Petrucciani, who passed away in January 1999 was a truly gifted player who could bring listeners to tears with his inventive strokes (an ...