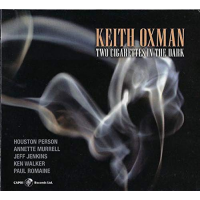 What's a sure way to make a pretty good tenor saxophone-led quartet even better? Simple. Invite a second tenor and make sure his name is Houston Person. That's what Denver-based Keith Oxman has done to further enhance his quartet's splendid new album, Two Cigarettes in the Dark, sharing the front line with Person on six of the session's ten tracks. To say that Person brightens every number he's on would be understating the case; as the saying goes, he could ...

With the impressive Two Cigarettes in the Dark, Denver-based saxophonist Keith Oxman delivers what is most probably one of the finest albums on the contemporary jazz scene today. Imagine being in a dark room where you see nothing and suddenly two cigarettes are lit; naturally your attention will be focused on the cigarettes and the smoke they produce. On this album, the two burning sticks are Oxman and legendary sax man Houston Person together lighting-up the place. The ...

Keith Oxman Quartet Nocturne Denver, CO March 10, 2017 Jazz is enjoyment. Lent is denial. Or so it seems. Can the twain meet? Yes, for me. I am observing Lent for the first time in my sixty years. The significance of Lent is clear and compelling. My church has taught and celebrated this eloquently. We set aside what does not give us life and embrace the Cross of Christ and his life. Few are ... 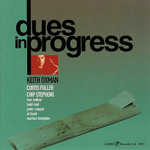 Oxman is joined by renowned trombonist Curtis Fuller, who also ...

Listening to music can be a pleasant experience, and Keith Oxman serves up just the right recipe on Dues In Progress, his sixth album. Trombonist Curtis Fuller contributes one track, the happy, snappy, Latin zinger “Cap'n Kidd," and the other members of the band chip in with some fine performances. At the end of it all, the listener can breathe a sigh of high satisfaction.

Oxman, who wrote six of the tunes, leans towards bop, but he also throws in ...

Keith Oxman's straight-ahead sextet interprets this program of standards and original compositions with a veteran's touch. Trumpeter Marcus Hampton sits in for “C.H.O.C., oboist Peter Cooper for “Darn That Dream. With his cohesive ensemble in sync, the tenor saxophonist delivers a clear message.

Keith Oxman is from Denver. His thirty years' experience in the jazz world includes an extensive stint with the Buddy Rich Big Band. His “Dues in Progress reflects the same kind of soulful swing that ...