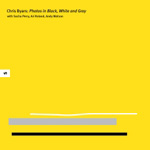 Saxophonist Chris Byars has made a name for himself as one of many promising neo-bop musicians who perform on a regular basis at Smalls in New York City, while also appearing on a number of CDs (as either a sideman or leader) issued by the Smalls label. He has played since the age of seven and earned a Masters degree at the Manhattan School of Music at the age of twenty. For his third date as a leader, Byars is joined by several of the label's regulars, including pianist Sacha Perry, bassist Ari Roland and drummer Andy Watson.

A talented player, Byars is clearly finding his own voice on each of his three instruments (alto, tenor and soprano sax) and his program of originals is well-paced with a fair amount of variety. He shows a bit of playfulness in "Aquarian Epoch," while the brisk samba "Manhattan Valley" is another obvious highlight. Byars' robust tenor is on display in the pulsating piano-less setting of "A. T." (dedicated to the late drummer Art Taylor).

He then switches to soprano sax for the enticing ballad "Safe at Home." Perry, who studied with Barry Harris, is a solid bop pianist who pushes the leader with his driving accompaniment. Roland provides a firm foundation, his arco bass technique inviting comparison to recorded Paul Chambers. Watson is a refreshingly restrained drummer who effortlessly keeps a strong beat, though he is no slouch when he takes the opportunity to solo in "A. T.."