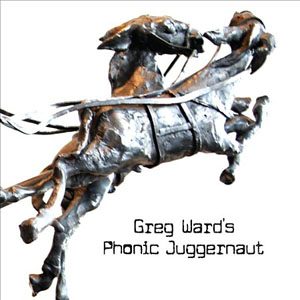 Greg Ward's trio Phonic Juggernaut can be loud, it also can be fast, but it can never be described as out of control. The twenty-something saxophonist's take on the modern jazz sax/bass/drums lineup adheres to the traditions of jazz, not as a regressive act but as a forward-thinking, innovative sound.

This Chicagoan-turned-New Yorker can be heard with drummer Charles Rumback and in Mike Reed's People, Places, and Things, as well as with the electronic outfit Prefuse 73. His initial release as a leader South Side Story (Nineteen Eight, 2010), was a quartet session, but he also dabbles in writing for chamber ensembles, orchestras, and ballet.

Just as drummer Tony Williams once propelled Miles Davis from his 1950s sound into the jazz/rock of the 1960s, drummer Damion Reid catapults the sound here, bridging jazz with modern beats. Reid, who also holds the drum chair in saxophonists Steve Lehman and Rudresh Mahanthappa's bands, matches Ward's energy beat-for beat, pacing the sound throughout; his restless dynamism is the constant spark here.

The disc opens with the thunderous "Above Ground" a heavyweight workout that pauses but a moment for bassist Joe Sanders to solo. Ward plays with ferocity, matched throughout by Sanders and Reid, and with an intensity of sound that recalls the late-'80s work of saxophonists Steve Coleman and Greg Osby.

But this is not just a jazz trio's version of DIY hardcore rock. Ward's arrangements include the nimble and polished "Velvet Lounge Shut-In," a vehicle for Sanders' bass to carry the melody, with some slick tom-tom and cymbal work from Reid, while the progressively layered "This Ain't In Book 3" begins with bowed bass and courteous saxophone, building upon aggressive drumming into an impenetrable wall of sound.

The signature piece is "Sectionate City," the only one not written by Ward. Andrew Bird's composition is recast as a piece of electronica, with the trio not so much making watered-down jazz fusion, but comingling elements under a jazz umbrella and making them honest.