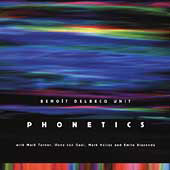 Benoît Delbecq is a unique and diligent musical explorer who deserves your listening attention. Phonetics and some recent performances provide a helpful introduction to two very developed aspects of his musical being.

In his solo piano playing (heard at the Jazz Gallery last month) Delbecq used a prepared piano technique that turned his grand piano into a grand African thumb piano of sorts. It was no mere gimmick: Delbecq carefully changed the "preparations while he talked to the audience about the upcoming piece, resulting in a singular sonic landscape.

The conceptual overlap between most of those solo piano performances and Phonetics lies in rhythmic concepts, many times (but not always) based on African polyrhythms. "Pointe de la Courte Dune starts with a haunting, slow-moving melody/harmony on the piano and viola. After the drums enter, playing what might be called a mid-tempo tom-tom groove, the viola and piano then present material similar to the opening at a much faster speed, still keeping the mysterious mood.

It's interesting to note that Delbecq nobly gives away much of the solo improvising space on this disc to the other players, yet his own solo performances proved that he has a lot to say as a pianist and can hold the rapt attention of an audience for a whole set. Phonetics boasts the introduction of two wonderful new players: violaist Gene Van Geel and drummer Emile Biayenda. (Bassist Mark Helias and tenor saxophonist Mark Turner also make big contributions.)

In concert Delbecq made a beautiful gesture of dedicating the song "Left Alone (a Mal Waldron/Billie Holiday tune) to the victims of hurricane Katrina. During this performance he played the piano "clean," without preparations. It was a very touching gesture, presenting a sort of musical parable, if you know the lyrics ("First they hurt me, then desert me, I'm left alone, all alone ). Then again, by playing this piece, he offered a different kind of gesture, a departure from his compositions to investigate the jazz repertoire.

On Phonetics there are no such departures, only Delbecq's compositions, which, as unique and fascinating as they are, sometimes lack the emotional directness and power of "Left Alone. That's a small point because the compositional work here is so unique that repeated hearings reveal different details each time.