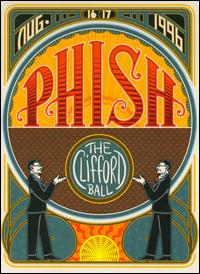 There may be no more lavish package this year than Phish's The Clifford Ball. Including memorabilia in the form of postcards and stamps through efficiently folded DVD cases with the continuity of the graphics extending from the book of essays and credits to photo inside the box itself, the bundle also contains virtually every note of the three official sets of music played each day of the two-day occasion. In addition, there's also a full-length bonus disc with more impromptu performances and a variety of documentary footage on the people and the production of the first Phish "festival."

In his "I was there" liner notes, Parke Puterbaugh does a fair job relating many of the events, both musical and non-musical, that took place that August 1996 weekend at the air force base in Plattsburgh, New York (the band playing along with fireworks on Saturday night, for instance). Still, the author's emotional detachment falls a bit short in communicating the cumulative sensation of attending The Clifford Ball. Perhaps that's no fault of his—how to accurately describe the sight of Ben & Jerry running on stage to sing for a nano-second or bassist/vocalist Mike Gordon making his way around the grounds chatting with fans?

Or how Phish sound absolutely exultant hitting the climax of "Harry Hood." This band doesn't usually wear its collective heart on its sleeve but coming out for an encore to offer a heartfelt acapella version of "Amazing Grace" is a benediction to the audience, themselves and fate. The quartet's vocal expertise isn't their forte, but it goes on display (along with their wit) in "Simple," itself a part of a titanic string of segues earlier that same day of August 16th including "Mike's Song" and "Weekapaug Groove."

Phish hasn't always exhibited this focus or such overall continuity in their performances, but at this point they were no more tired of the tunes than they were playing together. Quite the contrary, in fact, and when figuring in the obvious pleasure they all took in the success of the event, especially guitarist/vocalistTrey Anastasio it may be hard to find a more jubilant performance by this band.

Accordingly, the otherwise slight "Makisupa" gains some substance through the pleasure the group's taking in its performance, that same relish manifesting itself in some risk-taking like this abstract instrumental section, the closest thing Phish gets to conventional jazz. In keeping with their clever attitude, the group interweaves the theme from "2001" there, further demonstrating the ease with which they navigate the transitions from song to song as well as in and out of instrumental passages: during "Down with Disease," in particular, the expertly-timed edits of the video passages conjure a momentum all their own.

Phish does skid to a halt with its very last set. The solo spots from keybordist/vocalist Page McConnell and drummer/vocalist Jon Fishman effectively destroy the thrust such as it was generated from "Scent of a Mule" and Edgar Winter's "Frankenstein" and the trampoline act and night flyover is good theater but nothing so engrossing as watching the band as they play at their pinnacle as on the previous day or earlier this one.

The music may not have been the sole attraction of The Clifford Ball, but it was the catalyst for those performance art concepts, which included gliders soaring over the site and a classical orchestra playing prior to Phish on Saturday August 17th (is it serendipitous these dates coincide with the 1969 Woodstock Music and Arts Fair?). The sum of which stimulus, together with the size of the 70,000 crowd, amazed the band itself as they arrived.

The abandon in Phish's playing belies the attention to detail that supported the infrastructure of The Clifford Ball, as revealed in pre-production footage on the bonus disc. The same expert administration extends to the audio and video recording throughout this seven-DVD set, which captures not just the highest possible quality, but the many different vantage points on the event as possible: an eye-catching but all-short segment split-screen segment of Chris Kuroda's mastery of lighting, Jim Pollock's arts and crafts and, perhaps most interesting of all, the band themselves as they review the footage along with manager John Paluska.

Phish's eccentricity camouflages their fearlessness in trying to stage the event. The concept of a large rock festival that lay dead or dormant for twenty-five years of more at this point and the overall theming of the event-here based on a pioneer of the aviation industry-was sufficiently well conceived, it has served as a template, not just for future Phish events like "IT" and "Big Cypress," but also for modern-day festivals such as Bonaroo, which are tailored to fans as a multi-media series of self-contained events.

The foresight that led to preserving The Clifford Ball for posterity is an integral element of Phish's highly-improvisational musicianship, especially in the more open-ended intervals on record here apart from the formal sets. The tranquil liquid textures of "The Flatbed Jam"—Phish played late at night on Friday on the back of a truck being drawn around the festival grounds—represent reflection and recharge for more high- intensity performances. And the sound check jam is full of melodic and rhythmic ideas explored succinctly and in such a way that each of the four instrumentalists contributes almost equally.

The basic approach of such a jam, within which the freedom to pick and choose motifs, then to elaborate and focus upon them, is essential to the direction, momentum and clarity of the music. A similar overall approach applied to the original execution of The Clifford Ball and now extends to this box set, which at a suggested $99 dollar-retail price is a "huge bargain." This sublime event that couldn't have gone better than it did and you'd have to have been sitting in that summer sunshine at the time to experience it more fully.