By DOUG COLLETTE
February 5, 2011
Sign in to view read count 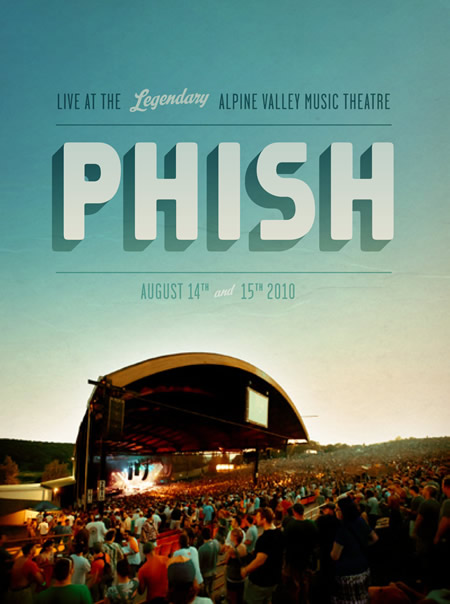 During the online pre-order period for Alpine Valley 2010, a full-length, remastered compilation of selected performances from the quartet's previous appearances at the scenic Wisconsin venue was available. Hearing that disc, however, only reaffirms what the two DVDs and two CDs in this box-set suggest in no uncertain terms: Phish has become no less expansive, only more efficient in its improvisations since regrouping in 2009.

Seeing and hearing Phish play live is a decidedly different experience than just hearing the audio recordings, even though the quality of the recordings in both methods is equally highly-defined (thought not, unfortunately, actually high definition on DVD). A wide-angle perspective at a distance from the stage is actually optimum for the quartet's shows, as the lights Chris Kuroda tunes in time with the music is a spectacle in itself even in a sylvan setting such as this.

Kuroda's work compensates for the lack of theatrics from Phish itself (except when guitarist Trey Anastasio and bassist Mike Gordon are bouncing on trampolines or doing a winsome two-step). None of the four musicians are particularly demonstrative onstage, though each has his quirks, but there is some novelty to their stage alignment: as pictured in the photo booklet (bereft of any text except credits), drummer Jon Fishman sits stage left in symmetry across from keyboardist Page McConnell, so that the quartet is in a line, an unusual alignment that is most apparent when a cross-stage camera angle (one of many including a select few of the audience) shows the quartet moving in unison as it plays.

Though they don't watch each other often in the course of an improvisation, these men are not isolated from each other. The intuitive reflexes honed through over 20 years of playing together is as obvious in the seamless mix of progressive rock and bluegrass that weaves in and out of songs like "Reba" and "Scent of A Mule." The former contains an interval of pure melodic beauty comparable to the absolute majesty of the hypnotic segment just preceding the vocals on "Dirt."

Bereft of the "distraction" of watching the band and the lights, hearing the audio alone, headphones or not, offers a wholly different perception on Phish's interaction, one in which the minutiae of its interplay is even more clear. There is no fall off of logic or feeling when McConnell's assumes the lead on "Funky Bitch" and the sophisticated pulse provided by Gordon and Fishman never falters.

Odd as it may seem to release essentially a single show in two different formats (there is an abundance of 8/15/2010 on the two DVDs), the logic here, in its own way, is as clear as the twists and turns within one of Phish's better jams. Alpine Valley 2010 offers the viewer and listener more than ample opportunity to analyze and experience the various elements of this group's idiosyncratic approach to live performance.

Tracks: DVD1: Tube; The Oh Kee Pa Ceremony; Suzy Greenberg; Funky Bitch; Reba; Fuck Your Face; Alaska; Back On The Train; Taste; When The Circus Comes; Lawn Boy; Sparkle; Gumbo; Run Like An Antelope. Bonus: AC/DC Bag; On Your Way Down;The Divided Sky; Stealing Time From The Faulty Plan; David Bowie. DVD2: The Sloth; Down With Disease; What's The Use; Scent Of A Mule; Mike's Song; Dirt; Sneakin' Sally Thru The Alley; Weekapaug Groove; Bug; Quinn the Eskimo. Bonus: Ghost; Theme From The Bottom; Big Black Furry Creature From Mars. CD1: Tube/The Oh Kee Pa Ceremony/Suzy Greenberg; Funky Bitch/Reba; Fuck Your Face ; Alaska; Back On The Train; When The Circus Comes; LawnBoy/Sparkle/Gumbo/Run Like An Antelope. CD2: The Sloth; Down With Disease/What's The Use/Scent Of A Mule; Mike's Song/Dirt/Sneakin' Sally Thru The Alley/Weekapaug Groove; Bug; Quinn The Eskimo. Wisconsin Edition CD:Tweezer; Down With Disease; Catapult; Ghost;Taste; Possum.