By NENAD GEORGIEVSKI
February 22, 2014
Sign in to view read count 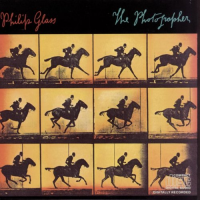 Apart from the recognizable repetitive patterns and melodies that adorn composer Philip Glass' music, there is also one recurring theme that reappears throughout his rich and illustrious career regardless if it is opera, symphony, theatre piece or soundtrack. That is the lives of luminaries, revolutionaries, discoverers, erudite scholars whose lives, words and actions have made a difference in the world and have inspired his music. In a range that includes Albert Einstein, Mahatma Gandhi, Pharaoh Ankhnaten, Walt Disney, Galileo Galilei, Yukio Mishima, Allen Ginsberg or the Dalai Lama, these people have, one way or another, provided the creative fuel for Glass to compose his unique, mesmerizing music.

So, it is not surprising that Glass' 1983 work The Photographer was inspired by the life and work of Eadweard Muybridge, an eccentric 19th century English innovator and photographer who developed a miraculous process for capturing movement on film, thus laying the ground work for the motion picture industry. Originally commissioned by the Holland Festival in 1982, this musical drama is based on an event in Muybridge's life—the murder of his wife's lover. A subsequent trial was international news, as Muybridge became the first "celebrity murderer" in American history.

According to liner notes, this work was planned as a three-part project—a play, a concert and a dance. The piece is divided into three acts, of which the first is "A Gentleman's Honor" (vocal) where apparent slow and simplistic trance-like melodies, buoyed by female vocals, create strange landscapes that radiate an unsentimental beauty. The text was written by Talking Heads' singer David Byrne. "Act II" is a perfect example of how mesmeric and transcendent Glass's work can be. With its gradual climaxes, repetitive patterns and Paul Zukofsky's driving violin, it is one of Glass' most powerful compositions ever. While his music can be aggressive and loud, here he achieves a similarly powerful effect, but where the restraint and slow pace give a great sense of drama, and the feel of an imminent volcanic burst in this brilliant composition.

"A Gentleman's Honor" (instrumental) is a reprise of the first composition, rearranged without the vocals. "Act III," with its swirling and recognizably dynamic synthesizer melodies, churning patterns, vocal tropes and pulsating rhythms, provides a grandiose, even bombastic finale to this play.

This wonderfully remastered 180 g, vinyl only release has a deep dark feel to it, and is a pure joy sound wise. At the start of the '80s, when he wrote this piece, along with a string of other brilliant releases like Glassworks (Sony Classical Recordings, 1982), Koyaanisqatsi (Orange Mountain Music, 1982) Ankhnaten (CBS Masterworks, 1987) Glass had already begun refining and expanding the style and vocabulary so characteristic for him, which culminated with his seminal opera Einstein on the Beach (Nonesuch, 1979). Glass' music is a specific branch of music minimalism that has almost always reflected the aggressive, edgy down-town music scene in New York. His music is not always an easy pill to swallow. Then again, some of the best music, like The Photographernever is.