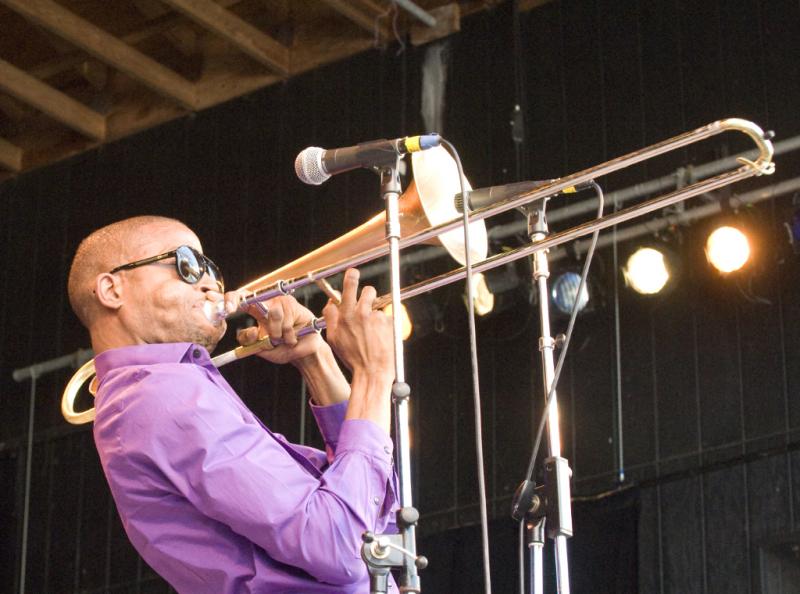 By WADE LUQUET
September 18, 2011
Sign in to view read count
Philadelphia Folk Festival
Schwenksville, PA
August 18-21, 2011
In 1962, when folklorist and DJ Gene Shay took to the stage of the first Philadelphia Folk Festival in front of 700 folk enthusiasts to introduce Pete Seeger, he had no idea that 50 years later, at the age of seventy-five, he would take the stage again. As he has done every year since, he introduced the audience of 15,000 people to performers like Arlo Guthrie, Tom Paxton, The Kennedy's, Levon Helm, David Bromberg, Campbell Brothers, Troy "Trombone Shorty" Andrews. One of America's longest running music festivals, the Philadelphia Folk Festival drew near record crowds to its 50th anniversary celebration at the Old Pool Farm in the Philadelphia suburbs, but to think of it as just another music festival, which we are all so familiar with, would be to miss the culture that has nurtured its existence for the last half century. Sponsored by the non-profit Philadelphia Folksong Society, the Folk Festival is made possible by over 2500 volunteers who run everything from parking to camping to security. 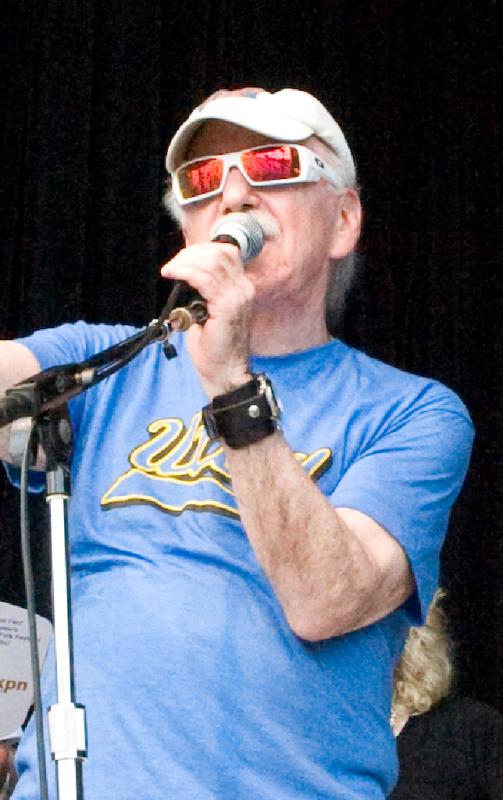 Ultimately, the Philadelphia Folk Festival is about the music. With five stages, including the large, permanent Martin Guitar Stage, the festival has hosted the likes of Janis Ian, Mary Chapin Carpenter, Ani DeFranco, Jeff Tweety, Rebirth Brass Band, Judy Collins, The Decembrist, Doc Watson, and many other folk, jazz, and indie groups. Music veteran Michael Cloeren, who was named this year as the new festival director, promises the future festivals will be bigger and better than ever, as he hopes to appeal to folk purists as well as younger audiences with more contemporary tastes.

The fiftieth anniversary lineup was exceptional, with Bromberg leading his own band, as well as sitting in with Guthrie and Helm. Trombone Shorty Andrews dazzled the festival audience with his high-powered trumpet and trombone playing, including a three-minute circular breathing solo that amazed the thousands sitting out on the lawn at the main stage. He and his very talented band had the audience on their feet and screaming for more when their set ended. While time did not allow for band encores, he made a surprise appearance with the David Bromberg Big Band, and once again, nearly stole the set. Andrews is a dazzling and charismatic young player who is certainly making himself known on the music scene.

The festival ended with a spectacular performance by the Levon Helm Band. Helm, who has been recovering from throat cancer, assembled a powerful group of musicians who kept thousands glued to their seats in spite of a steady rain that turned the field to mush. While Helm's voice was obviously affected, his enthusiasm and talent for the music was quite evident in his drumming and mandolin playing. It was a great end for a great festival.

ADVERTISEMENT
For fifty years, all of this music has been made possible by the yearly dedication of thousands of volunteers and regular festivalgoers, many of whom brag about their decades-long attendance. It is these regulars and volunteers who have created a culture unique to this festival. Arriving two days before the official start, the volunteers get first crack at what can only be considered a "land grab" in the camping area, with the general public repeating the scene a day later in an area reserved just for them. Over 65 camps, or what some consider tribes, are filled with tents by 6000 campers who create elaborate, yet rustic, areas that are often comprised of a main gathering tent surrounded by multiple smaller sleeping tents. These campsites often bear names such as Fish, Festicles, Canada, and Azzoles as a way of distinguishing one from another, and providing a sense of identity to its inhabitants. Many are decorated with items such as life guard chairs, saloon doors, fences, and flags. Campers come well supplied with food, drink, musical instruments, games, and music. For many, the festival is the campground, with some seldom leaving to attend the music venues.

Many compare the Philadelphia Folk Festival to Woodstock with its laid-back, cooperative atmosphere. In what might be called the "hippie" spirit, the fest is a place where many come annually to not be themselves. With an abundance of tie-dye clothing, sandals, and linen wear, campers are far removed from their usual responsibilities as teachers, bankers, and business people. The campground is a place of frolicking fun and a communal spirit as tribes absorb newbies and teach them the ropes and the rules of the festival. The creek that runs behind the festival grounds serves as a swimming hole for those who want to escape the August heat, and wash off the day's perspiration.

And while the festival brings in some of the country's best folk, jazz, Irish, independent, and world musicians, some of the best music can be heard right in the campground in small groups around the campfires. Recognizing the quality of the camp bands, this year festival organizers chose several groups, including Hogmaw and the Philadelphia Jug Band, to appear on the main stage. Instruments are so abundant in the camping area that the festival offers an instrument check-in trailer manned 24 hours a day to keep instruments safe and dry while not being used. Drums, guitars, basses, banjos, and mandolins can be heard playing constantly as groups keep the jams going into the wee hours of the night. 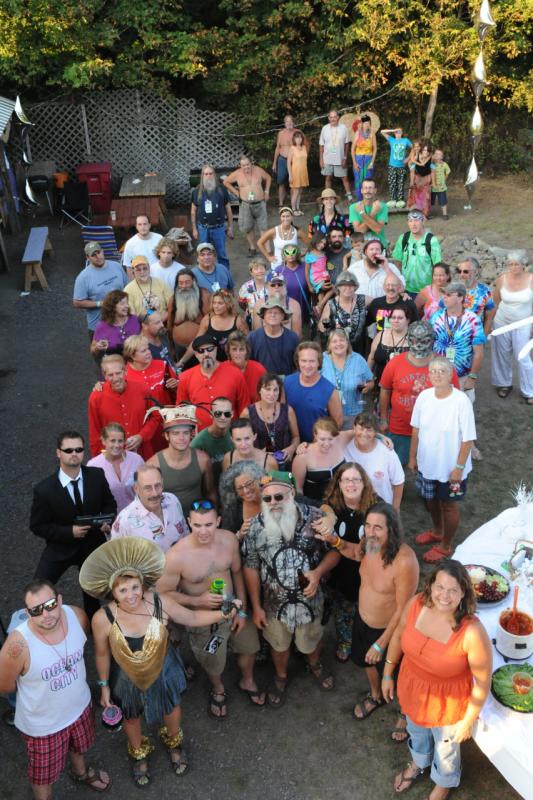 But it is a small group of 60 dedicated volunteers known as Groundz that arrives in early July to transform this working hay farm into a venue that supports over 6000 campers, 10,000 day-trippers and an array of class acts in folk, jazz, and world music. Groundz volunteers are a family of close friends who each year turn a hayfield into a music venue. Many have called this group the heart of the festival. With only a few permanent buildings—one being the large, elaborate stage built with the help of the Martin Guitar Company—the Groundz crew spends weekends, starting July 4th, constructing craft booths, clearing fields, putting up fencing, and building makeshift structures to support all the other volunteers who make this festival possible. Many, such as Groundz chairman Lee Theis, give up their vacation to be a part of the annual construction. Asked what drives him to do this, Theis replied, "This is my heart." Theis' wife, Sue, and his daughters also assist, as do many other families who make building the folk festival a regular part of their summer. An emotional Ellen Ehrlich Superfine, a sixteen-year volunteer and co-chair of the Groundz committee, says..."the reward is seeing the field filled with smiling faces and the children's area filled with dancing children. I can't imagine doing anything else with my summer. This is sacred ground, and I want to be a part of making it special."

While the Groundz committee's does its work prior to the start of the festival, as well as the deconstruction and storage afterward, it is also charged with finding solutions to any structural problems that may occur during the event. The dedication of the group was apparent when a series of afternoon thunderstorms and high winds rolled through the festival on several occasions over the weekend. In one incident, a tall scaffold with a video screen fell near the main stage, and the massive tent over the camping headquarters was lifted, twisted, and destroyed, when a reported 70 mile per hour gust swept through the festival grounds early Friday evening. Fortunately, no one was hurt. The Groundz crew ran to both sites to stabilize, then dismantle the structures—all the while keeping festivalgoers away from any danger. Working through the night, new structures were in place by morning.

For its work and effort, the Groundz committee is provided with a separate camping area that allows this group to gel and develop its own rituals that include parties and shared meals. They have become a close family that gets together for several months each year to be a part of something bigger than any individual in the group. They have become so close that several deceased members have had some of their ashes spread in the Groundz fire pit during tearful memorial services. Groundz members have helped each other through sicknesses, and have been generous during periods of underemployment. Their work together over many years has no doubt brought this diverse group of construction workers, hair dressers, bio-technicians, mechanics, school teachers, photographers, and artists together as a tight-knit family unit.

And therein lies the difference in culture in the Philadelphia Folk Festival. While most festivals are about the music—and certainly that's what music festivals are about—this festival has the added attribute of 6,000 people coming together each year in a campground—a sacred ground to many—to form a family. These are groups that come together to recapture the close feelings they have for each other at this yearly event. Their love of music brings them to the farm, but it is their love for each other that has made the Philadelphia Folk Festival a success for the last half century. There is no doubt that this same culture of love will take it into the next fifty years.