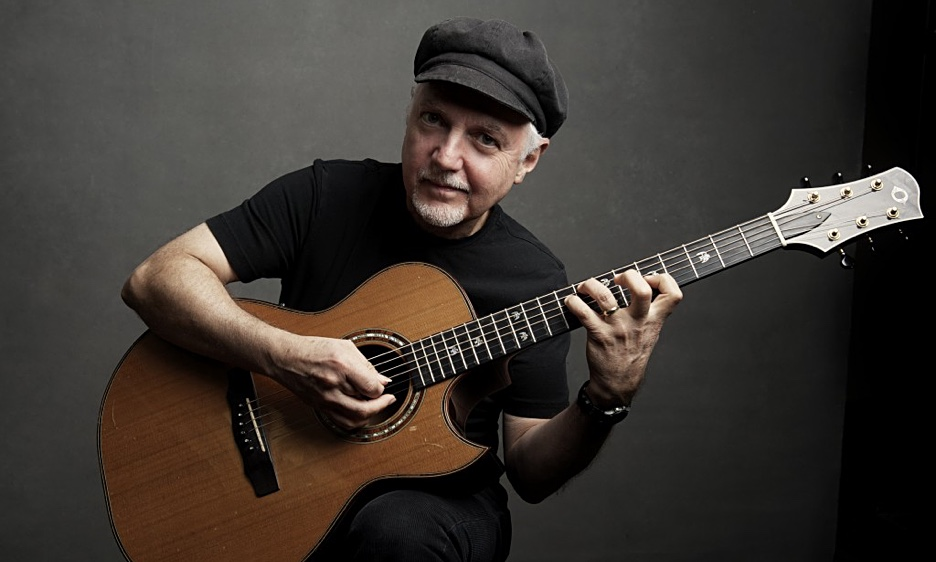 During a performance of his song "Mercy," from his 2016 album All At Once, Phil Keaggy shouted to the audience, "Put those hands together!" Hundreds of people clapped in unison while he played an expressive solo over layers of looped acoustic chords. At the solo's climax, he silenced all of the loops except for one acoustic phrase, which he triggered slightly off-beat. As the loop repeated and slid further and further out of step with the crowd's clapping, Keaggy said, "That's just what I needed." While the audience laughed, he added, "It's amazing I don't drive erratic, the way I am with these pedals."

The charming rough edges of Phil Keaggy's one man show at Mount Hermon Redwood Camp on July 13, 2019 did not distract at all from his masterful playing and soulful singing. Keaggy, a guitarist and songwriter with more than 40 years of experience and 60 albums under his belt, had performed at Mount Hermon, a Christian camp in California's Santa Cruz Mountains, once before, during a similar series of summer concerts during 2018. In an interview after the show, he said he enjoys performing at Mount Hermon because the audience "just seems so warm and accepting."

In this concert, Keaggy demonstrated his compositional and improvisational skill using his array of looping pedals, which he said he has been expanding ever since experimenting with an MXR Digital Delay in the early 1980s. In "Salvation Army Band," a track from 2011's Live From Kegworth Studio, he built the original song's acoustic blues groove up into a relentlessly dynamic odyssey, transitioning effortlessly between acoustic solos over constantly evolving chord loops.

"What a Day," a track from Keaggy's 1973 LP of the same name, began with a lovely series of Spanish guitar leads incorporating bursts of percussive tapping which he paused to call, "Kind of a new intro." He sang the simple song in a breezy falsetto before reaching higher and higher with his vocals and chords before looping his guitar and launching into one of the night's best solos as he wandered the stage. After his solo, Keaggy yelled, "Sing with me!" and hundreds sang the track's refrain, "What a day, what a day it will be," in unison.

At some points, the concert broke from Keaggy's music, instead functioning as a religious event. Mount Hermon staff collected an offering collection during the show's intermission, and Keaggy read passages from the Bible, which he said he did because it is common practice at Mount Hermon.

Keaggy told the audience before reading from scripture, "If I can't sing like I wish I could sing, I can at least read these words to you that are life." Before beginning to play his last songs, he said, "May you be encouraged with the words of compassion that come right out of scripture for you."

Keaggy has been touring since 1967, and he said that he would like to retire from the road completely. "But I don't have a retirement plan," he said. "So I have to do this." However, Keaggy said he enjoys sharing Jesus through his music, which helps motivate him to continue touring. "He's all right with me, to quote the Doobie Brothers," he said, laughing.

When asked about the similarities between his live arrangements and the production on his collaborative album with bassist Tony Levin and drummer Jerry Marotta, The Bucket List, Keaggy said they let him freely add guitar to finish their initial jam sessions, which sat in a hard drive untouched for eight years.

"They've already got a history of playing with some of the greatest artists in the world," he said. "This is not going to make or break them."

Although Keaggy created lush arrangements, his creative playing consistently stood out from his dense walls of sound. "Shades of Green" began with a simple, new age blend of chords and arpeggios, then became more complex and creative as he played by slapping while holding a shaker, or plucking strings muted between two capos to create a subterranean rhythm.

Despite Keaggy's obvious dedication to his craft, he never ignored or tried to cover up his mistakes. In the middle of "Salvation Army Band's" instrumental evolution, he mistimed his loops when stripping the song down to one chord progression. Keaggy made an exasperated face, shrugged, then moved on, recording new loops and layering on new solos. Keaggy's humble sincerity and his obvious desire to connect with his audience, which he drove home by meeting fans and taking pictures for at least an hour after the show, made his performance more than just an example of skill.