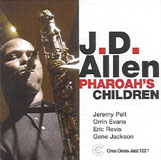 When it comes to recordings of mainstream excellence, it's hard to ignore the impressive battery of titles that producer Gerry Teekens has built up for his Criss Cross imprimatur. The label has established an consistently reliable reputation among experienced musicians, most recently shifting towards documenting some cutting edge musicians of a younger age. Case in point, Detroit-raised J.D. Allen, whose first album for the Dutch based company is a point of departure from their typical fare, albeit with a flavor that can be heard in the work of Tim Warfield.

As a saxophonist, Allen is indebted to inspirations such as Wayne Shorter, Joe Henderson, George Coleman, and the previously mentioned Warfield. At the center of his sound are a firm attack and fluidity in both register extremes that speaks of an acknowledged technical prowess. As a writer (he penned all eleven of the album’s cuts), Allen takes as a jumping off point the work of the Miles Davis quintet circa 1966. Many of the pieces are limited in melodic content, jumping directly to often incendiary solo moments from the saxophonist and pianist Orrin Evans, all spurred on by a rhythm section of Eric Revis and Gene Jackson. Most of the tracks clock in at six minutes or less and fall under two major categories: up-tempo ‘burn outs’ or dark and mysterious ballads. Up-and-comer Jeremy Pelt is heard to great advantage on three selections, and one could argue that it might have been a good idea to have him available throughout.

In the end, it might have served Allen better to pare down the selections to a smaller number and develop each one more fully. As such, it would become easier to distinguish one composition from another. Regardless, hats off to both Criss Cross and Allen for taking some risks. One can be sure that we’ll be hearing more from this talented youngster in the future.

Our Man Revis, Queen Elisabeth, Mademoiselle Blackman, So Get Rid of the Midgets and Send in the Giants, The Annex, The Bitter Pill, Mr. O.E., Pharoah's Children, House of Eugene, Action Jackson, Question.