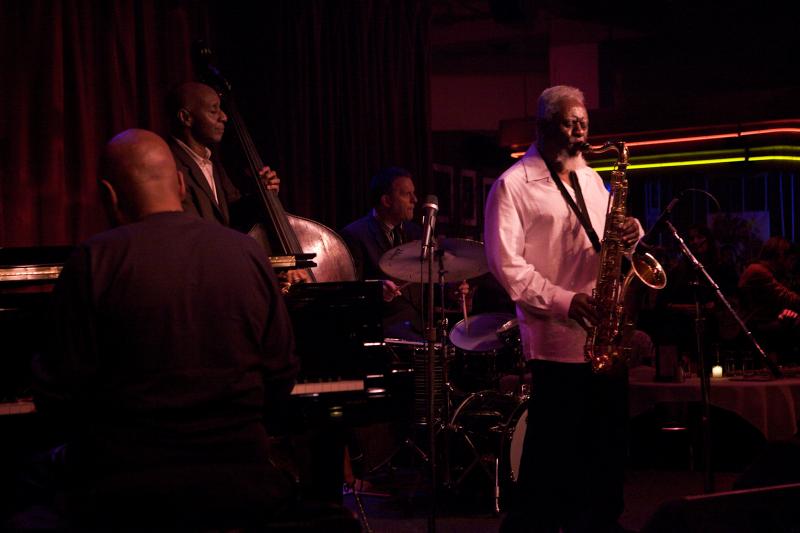 Tenor saxophonist Pharoah Sanders has long embodied the tradition, the musical voice, and the spirit of John Coltrane. He is arguably among the most truly authentic of Coltrane's disciples, considering that he was a member of the saxophonist's band during the last two years of his life. At the same time, Sanders offers an exuberant, inspired kind of expression that is all his own.

Joining Sanders at Birdland for a five-night stint were three longtime collaborators: pianist William Henderson, whose first recordings with Sanders go back to 1987, bassist Nat Reeves, the longtime faculty member at the jazz program begun by Jackie McLean at the University of Hartford, and veteran drummer Joe Farnsworth, whose résumé includes work under a list of bandleaders that reads like a who's who of jazz.

The quartet opened the first set on their first night at Birdland with Coltrane's composition "Welcome," which was initially recorded by the classic quartet—with pianist McCoy Tyner, bassist Jimmy Garrison, and drummer Elvin Jones— just two weeks before Sanders' first recording with a larger Coltrane ensemble in June, 1965. Evoking Tyner's attack and style, Henderson laid the foundation for the tune, a rubato ballad prayerfully projected by Sanders, with Farnsworth playing freely on mallets throughout.

Next was a Sanders' original, "Doktor Pitt," an up-tempo tune made up of shifting modes in eight-bar segments, first recorded on Journey to the One (Evidence, 1980). Sanders built his solo by liberally using the Coltrane "sheets of sound" vocabulary, punctuating it with occasional forays into the altissimo register, overblowing to achieve the multiphonics that Sanders is well known for—producing multiple tones out of his instrument simultaneously. Reeves largely kept to walking in his accompaniment, but with a certain freedom in his playing, an approach that continued through his solo. Sanders concluded the tune by wielding his saxophone up close to the microphone and emitting a range of sounds without blowing into it— tapping the keys and drawing out sounds percussively using the pads and the air in the horn.

Sander's approach to the Coltrane ballad "Naima," was a very straightforward one—simply stating the classic melody at the beginning and end of the performance, leaving the improvisation for others in the band to showcase Reeves' beautiful tone, Henderson's rich modal colorings, and Farnsworth's fine brush work. A blues in B flat followed, with Sanders blowing at least 16 choruses and sprinkling the most bebop flavorings of anything in his set. Farnsworth's solo in particular stood out here, quickly criss-crossing his arms here and there as he got an impressive variety of sounds out of his small drum kit.

The closer for the set was another Sanders original, "The Creator Has a Master Plan," perhaps his best-known composition and one that often draws comparisons to Coltrane's "A Love Supreme." The tune started off with Reeves playing arco, with Sanders improvising loping, legato lines, and some especially powerful playing in the lower register, in addition to his soaring altissimo. Sanders also contributed some vocals to the performance, bringing to mind somewhat Leon Thomas' singing and yodeling on Sanders' classic recording, Karma (Impulse, 1969). Sanders also invited the audience to join in on the singing, while he danced away in small movements on stage. He finished the song as he did with "Doktor Pitt," tapping the keys of his horn.

When he was asked, during a famous interview conducted by Frank Kofsky in 1966, how he liked having Sanders in his band, Coltrane said, "it helps me stay alive sometimes." There's no doubt that Coltrane's influence on jazz has been—and will continue to be—a lasting one. With performances like this one at Birdland, Pharoah Sanders is, in his own unique way, doing more than his part to keep Coltrane's legacy burning bright.