Following the death of saxophonist John Coltrane in 1967, two of his band members, pianist/harpist Alice Coltrane and saxophonist Pharoah Sanders, aligned themselves to fashion—separately and together—music which became known as "astral jazz." The style foregrounded the African and Asian song forms, and percussion and drone instruments, which John Coltrane had explored during his final years, while favoring lyrical, leisurely improvisations in place of the intense, anguished solos associated with him during the same period.

Sanders' embrace of astral jazz actually preceded John Coltrane's passing. In late 1966, he recorded the first fully formed album in the style, Tauhid (Impulse!, 1967). Alice Coltrane's first astral forays came at the end of the decade, on Ptah, The El Daoud and Journey Into Satchidananda (both Impulse!, 1970), though the astral seed was planted on the earlier A Monastic Trio (Impulse!, 1968); all three albums featured Sanders.

Alice Coltrane never abandoned astral jazz, though she did withdraw from the public eye to concentrate on Indian-based, pantheistic devotional music prior to her return with Translinear Light (Impulse!, 2004), her first commercially released album in 25 years. She passed in 2007.

Sanders, happily, is still in town, and he, too, has never abandoned astral jazz. Even his relatively straight-ahead albums of the 1980s and 1990s—notable among them Africa (Timeless, 1987), Welcome To Love (Timeless, 1990) and Crescent With Love (Evidence, 1992)—have astral resonances.

In 2000, he released the explicitly astral Spirits, recorded live at the Montreal Jazz Festival in 1998. 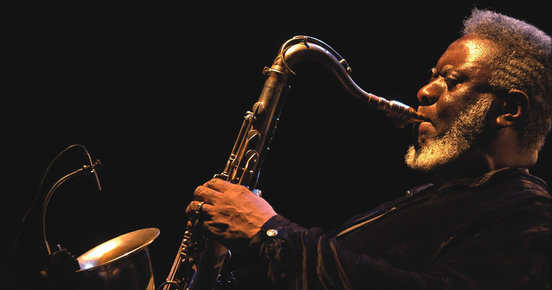 Spirits is stripped-down astral jazz—Sanders is accompanied by percussionists Hamid Drake and Adam Rudoph only—but is no less transporting than those of his albums in the style featuring bigger lineups. For just over an hour, mainly on tenor saxophone, he essays melodic, extended solos rich in his signature multiphonics, occasionally switching to wood flutes or wordless vocals, alongside which Drake and Rudolph weave layers of hand drums and percussion. Providing a further seal of astral authenticity, Rudolph's overtone singing stands in for the tamboura, the Indian drone instrument adopted by Sanders and Alice Coltrane in the early 1970s, and which became emblematic of astral jazz.

The opener, "Sunrise," at 19:12 the longest track on the disc, is centered around Sanders' tenor, Rudolph's thumb piano and overtone singing, and Drake's frame drums. The piece unfolds slowly and gently, and Sanders, in top form here as elsewhere on the album, is transfixing. The tabla-driven "Morning In Soweto" and "The Thousand Petalled Lotus," which follow, are faster and more urgent, with Sanders' tenor taking on a rawer tone. The mood mellows on the flute features "Ancient People" and "Calling To The Luminous Beings," before picking up speed on the bendir-propelled, North African-flavored "Roundhouse." The disc closes with a 5:05 reprise of "Sunrise," having taken in a few brief divertissements along the way.

Spirits is a beautiful album which, despite its trio format, is in the tradition of the recordings Sanders and Alice Coltrane made in the 1970s. (A half dozen of these were reissued in October 2011 in Impulse!'s 2-on-1 series and are reviewed here).