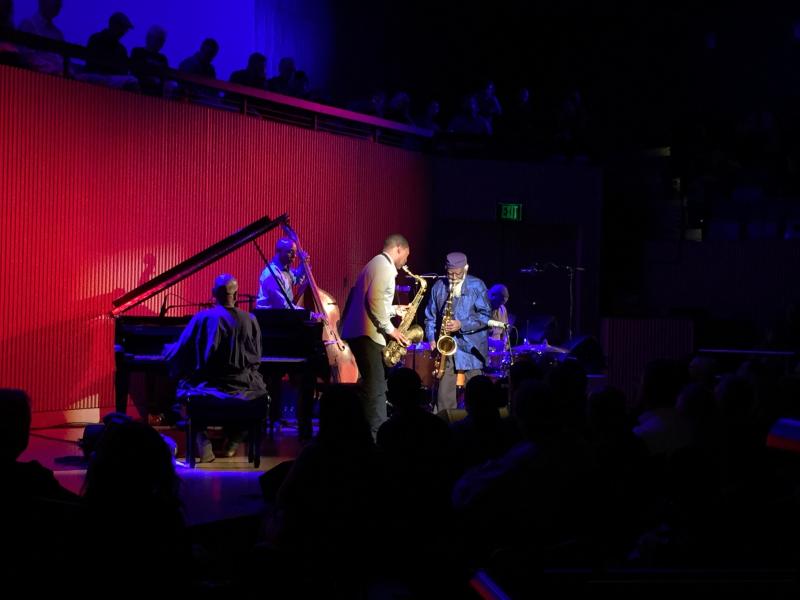 As a senior statesmen of the saxophone, Pharoah Sanders requires no introduction to jazz afficianados. Nor is he a stranger to San Francisco's jazz scene: He has lived just across the bay, having resided in Oakland after high school. Chances these days to see this Bay Area legend on his home turf are few and far between, so his appearance at SFJAZZ, where he headlined one in a series of nights commemorating the late saxophonist John Coltrane, was highly anticipated.

Born Ferrell Sanders in Little Rock, Arkansas, Sanders joined the renowned Sun Ra's Arkestra in 1962. Sun Ra—famous for his Egyptian-style costuming and wild sound—christened him "Pharoah," a natural moniker given the band's eclectic "ancient Egypt" bent and Sanders' spiritual sound. His most famous gig was his long-term association with saxophonist and composer John Coltrane, so it was fitting that his son Ravi Coltrane, who was also performing every night of this SFJAZZ celebration, was scheduled to join him onstage.

The trio (longtime collaborators William Henderson on piano and Nat Reeves on bass, with Johnathan Blake on drums) filed on and started playing. Sanders then emerged and brought an already fiery tenor to the microphone. Extended tenor blowing on the Sanders classic "The Creator Has a Master Plan" was complimented by Blake's deft mallet work. The ensemble halted briefly for applause and then dove in again, as Blake using sticks this time.

Sanders seated himself to the side and raised and lowered his hands in tandem as the tone turned reflective. After he and his saxophone returned to the mike, the tempo gained in ferocity. Handclapping by the audience, initiated by Sanders, brought the tune to its conclusion.

A performance of "Greetings to Idriss" was followed by the charming ballad "Over and Over Again." Reeves evoked strong tones from his bass, which was complimented by Blake's fast-paced stick work.

The John Coltrane signature tune "Giant Steps" featured a wonderful soulful bass solo by Reeves and a raging drum solo from Blake. Sanders held up his horn with both arms above his head and then lowered it, as he shimmied down. A standing ovation brought the first set to a close.

Following the intermission, Blake led things off when who should walk on the stage but Ravi Coltrane to partake in soloing on his father's "Olé,"a tune based on the Spanish folk song "El Vito." It featured some lovely piano (including a great solo) from Henderson, fiery sax from Coltrane and Sanders, and a pedal-and-cymbal heavy innovative solo from Blake. Then it was time for Sanders' heady ballad "Tina," which began with a percussive mix. The evening was topped off by a reprise of "The Creator Has a Master Plan," during which Sanders elicited a call-and-response routine with audience members, and Coltrane once again advanced to the mike for another dynamic solo.