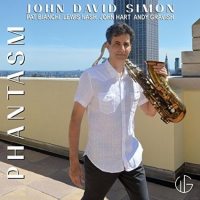 Veteran saxophonist John David Simon delivers his third album as leader swinging through a repertoire of ten straight ahead mainstream material on the very classy Phantasm, featuring a blend of sparkling original statements and fresh new arrangements of several standards from such icons as the great John Coltrane, Horace Silver and Pat Martino among others. The South Philadelphia native who currently resides in New York City, performs as a free-lance musician and is also employed as an educator. As a sideman, Simon has been on the jazz scene for a while having performed with some of the best in the business from the late Clark Terry and Buddy DeFranco, to Lionel Hampton, Illinois Jacquet and Ella Fitzgerald just to name a few.

For this date, the saxophonist chose an array of instrumentation on which to interpret the music where he fronts formats from trios, quartets, quintet and a sextet on his original "See-Saw." The lively brisk new sound emerges in a trio setting on the rising original "New Dawn," featuring a powerful tenor voice along with the supporting voice of Pat Bianchi's Hammond B3 organ and the constant firm drumming of jazz luminary Lewis Nash. Guitarist John Hart makes the first of five appearances on the superb "Inside Out" and stays put on the following "Squirrelly," a hard-driving number introduced by Nash's strong beats and also includes trumpeter Andy Gravish among the fray.

Simon takes to the flute on the delicate and tranquil Horace Silver jazz classic "Peace," toned downer to only feature a trio in a soft mood change from the theme of the disc. The music returns to a more turbulent nature on the exciting title track, a burner for sure highlighting Gravish on a mean trumpet solo and of course, the leader on another one of his torrid exchanges. Simon borrows a composition from the Canadian pianist Milton Sealey providing a showcase for Bianchi's talents on the organ and doing real justice in a fine rendition of the piece. Perhaps the most raucous, in-your-face tune here, goes to the original "See-Saw," the only sextet piece of the session bringing in trombonist Michael Boscarino to join the extended group.

In stark contrast to the party-sound of "See-Saw," the band ushers in a stellar version of Coltrane's immortal ballad "Naima" offering Simon, Bianchi and Nash, an opportunity to share a gentler side of their playing on one beautiful warm piece of music. The music remains soft on the following original "Inwood," but goes out soaring on the upbeat and delicious rendition of the familiar Jimmy Webb classic "Up, Up and Away" capping a superb session of traditional jazz.

Saxophonist John David Simon provides some of his best work on the dynamic Phantasm, where his skills on the saxophone are accompanied by his talents as a composer and arranger. Phantasm is a tasteful, attention-grabbing session of straight jazz offering a bit of ballads, a good portion of bop and swing, and unquestioned musicianship to seal the deal, well done!

New Dawn; Inside Out; Squirrelly; Peace; Phantasm; Black Diamond; See-Saw; Naima; Inwood; Up, Up and Away.