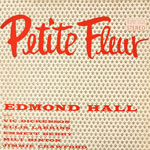 This reissue raises issues about "the tradition"—whatever the hell that is. This music was slightly venerable when it was recorded back in 1959, but the sheer verve and aplomb with which the program is delivered makes questions about its place in the overall canon of jazz seem immaterial.

At the time of the recording, Edmond Hall had not long departed from the ranks of the Louis Armstrong All Stars, and outside the restricting routines that were a hallmark of that band, he takes the opportunity to show his mastery of the entire pre-bop jazz vocabulary. On the likes of his own "Cook Good" he's aided in this endeavour to no small degree by the underrated Ellis Larkins on piano, whose trenchant urbanity—there can be such a thing!—marks a nice contrast in solo terms to Hall's patented clarinet playing, the mark of which is deeply personal at the same time as it is a whole lot more than the display of empty virtuosity.

The same qualities apply to the trombone of Vic Dickenson, and he and trumpeter Emmett Berry both excel on the tracks on which their presence makes the band a sextet, not the least of these being the Duke Ellington medley, where all the horns plus Larkins get the chance to shine. The program overall has a nice balance about it, with standards mixed in with Hall originals, and while the standards are largely nothing if not well done a number of times over on record, in the hands of these guys something fresh seems to emerge from each of them.

Ultimately, indifferent playing time might be an issue for those who prefer to buy their music by the yard. For everyone else this is essentially music of a bygone age which still has a place in the early years of the 21st Century, especially when it's put out by musicians who knew their stuff inside out and had the vocabulary to express themselves eloquently.

Petite Fleur; Ellington Medley: Prelude To A Kiss, Do Nothing 'Til You Hear From Me; Solitude; Don't Get Around Much Anymore, Mood Indigo, Take The 'A' Train; Clarinet Marmalade; Edmond Hall Blues; Cook Good; Off The Road; Adam And Evie; Don't Give Me No Sympathy.