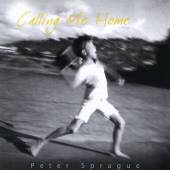 In his varied, 30 year career, guitarist and composer Peter Sprague has always shown an affinity for vocalists. On Calling Me Home, this affinity is expanded to its logical conclusion. The disc features vocals on every tune and draws from a deep talent pool of five incredible voices. What's particularly amazing about this effort is that Sprague has created a very accessible release by simplifying some of his compositional stratagems without ever resorting to the lowest common denominator. This is a collection that deserves to crossover to as wide an audience as it can.

The beauty is that in simplifying some of these song forms to accommodate vocalists, Sprague has also created a masterful instrumental disc. Some of the best guitar solos he's ever recorded are included. All of these songs would work perfectly without vocals; indeed, "Rain," "Mudra" and the title track have all been recorded as such already. It is both a testament to the versatility of the five singers and to Sprague the melody writer that these pieces sound so beautiful. Even when the lyrics border on the ponderous, the melodies are so strong that it's a non-issue.

The disc begins with an appearance by Kevyn Lettau, the vocalist with Sergio Mendes in later years. From the opening guitar chords of "Sarah's Island," it's clear this piece is going for a special groove. The Latin feel is well established by Sprague's nylon-string guitar and the inventive bass lines of Gunnar Biggs. The percussion tandem of drummer Duncan Moore and conga player Brad Dutz completes the landscape that Lettau soars above with her breathtaking vocals. The band drops out when she sings,"closed eyes can feel the sun," which effectively starts a new chorus. Sprague's solo on this one is inspiring. Toward the end, through the magic of multi-tracking, Lettau creates a double-tracked four part harmony with herself which is mesmerizing in its intricate beauty. "Sarah's Island" is an instant highlight.

Soulful tenor Leonard Patton is next on "Holding On In Bombay," a uniquely original ballad featuring Sprague's own lyrics. Patton is given a gorgeous palette of rolling guitar chords, bass and tablas over which to paint his yearning, searching, gospel-tinged vocal. Guitar synthesizer washes add tastefully to the background. Patton has another special feature on the tune "Mudra." His pliant tenor is at its very best when he stretches it to its emotional limit, and "Mudra" captures this dynamic perfectly.

A Pueblo Indian prayer provides the lyrical basis for "Hold On," a duet of Patton and vocalist Lisa Hightower, and while the lyrics seem like they would be awfully hard to sing, these two pull it off with a casual ease. Patton and Hightower harmonize together beautifully, and Sprague takes another fantastic guitar solo.

Hightower is featured on the ballad "Rain," which sounds like a vocal cousin to Pat Metheny's "Travels." Hightower's voice is sumptuous and pitch-perfect and on this one, heart-breaking. "Rain" is another of this album's highlights. The tune was originally recorded as an instrumental on Sprague's Light Dance(SBE Records, 2001), and it was his frequent writing partner, Randy Phillips, who provided the profound words for this vocal version.

Sprague has worked with Patton, Lettau and Hightower for many years. The final two singers who grace this disc, Allison Adams Tucker and Kate Fuller, are more recent discoveries. Tucker's solo spot comes on "Cantar," a song that celebrates the joy of singing, which is appropriate because she conveys such a sense of ecstasy in her insanely melodious vocal. The intricate details all over the arrangement of "Cantar" buttress Tucker's astonishing performance. When playing Brazilian type music such as this, Sprague utilizes fingernails on nylon-strings and the result is so clean and percussive—it's as if he were striking the guitar with a drumstick. Again, the excellent drummer Moore, this time paired with the congas of veteran Tommy Aros, propels the infectious samba groove to inspired heights.

Sprague conceived the words and music for "To Live In The Heavens" while stuck in a horrible traffic jam. The lyrics are quite beautiful and the vocal performance by Kate Fuller is another example of some of the wonderful talent that exists in this world. Fuller has a lithe, folk inspired style. She sounds like a mix of Joni Mitchell and Buffy St. Marie.

Randy Phillips "compiled" the lyrics to "Weird Science, Modern Times" out of some of the more unusual descriptions that came from Sprague's weekly e-mails to his fans. "Weird Science" begins with the ubiquitous James Brown funk chord, but ends up visiting a more sophisticated, lushly produced space. The vocals are performed by Hightower and Patton.

The inspiration for "Power To Rock" came from reading an interview with actor/musician Jack Black, who has both parents in academia. The lyrics reflect his wry assessment of where he landed, intellectually, in comparison. Black ought to grab this tune for his next music-related movie. "Power To Rock" is, as advertised, straight up rock and roll: Sprague even takes the obligatory "shred" solo, complete with distortion and string bending.

That Sprague has continued to evolve as a guitarist and composer is surprising to no one familiar with his career. His efforts as a lyricist are surprising, but encouraging. It's his continued development as a producer that is particularly impressive on this disc. This is an incredibly detailed effort and every detail is sublime. This album should appeal to anyone who loves singers and the art of song.

Tracks: Sarah's Island; Holding On In Bombay; Cantar; Rain; Hold On; To Live In The Heavens; Weird Science, Modern Times; Mudra; The Power To Rock; Calling Me Home.

Sarah's Island; Holding On In Bombay; Cantar; Rain; Hold On; To Live In The Heavens; Weird Science, Modern Times; Mudra; The Power To Rock; Calling Me Home.