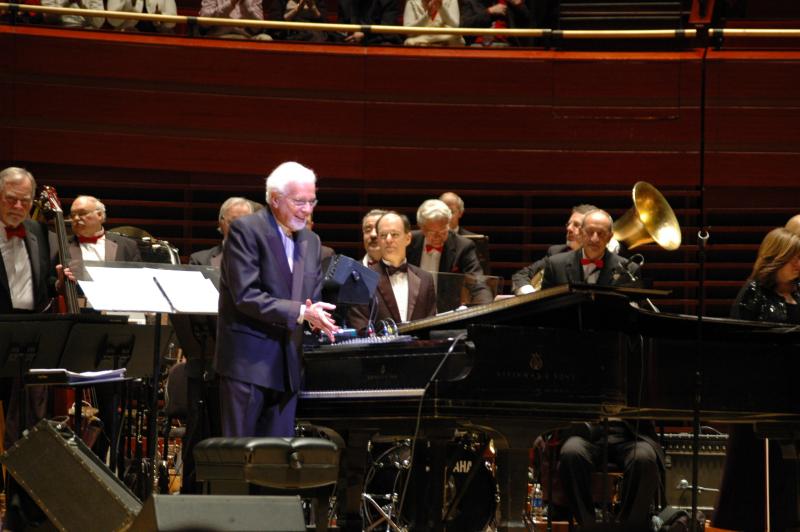 By VICTOR L. SCHERMER
January 22, 2011
Sign in to view read count
Peter Nero and The Philly Pops
"Swinging in the New Year"
The Kimmel Center for the Performing Arts
Philadelphia, PA
December 31, 2010

Peter Nero is that rare musician who can negotiate between classical forms, the jazz idiom, popular music and light-hearted humor, generating great energy in his co-musicians and audiences. So it was an inspired touch for him to add a New Year's Eve concert to the already packed schedule of performances of the Philly Pops which, in a few short years, has become a staple and legend on the Philadelphia music scene. There is no doubt that, given this stellar performance before a packed house, many Philly New Years to come will be ushered in by the Pops.

This concert, featuring vocals by Broadway diva Debbie Gravitte, provided a well-attuned mixture of swing era arrangements, Broadway blockbusters, and extended suites, ending up with the trademark clap-along and the first-time New Year honk-along, with the audience's kazoo-sounding honkers accompanying Sousa marches and ending, of course, with a Guy Lombardo-esque "Auld Lang Syne." The concert, which ran without intermission from 8:00 to 9:30 pm warmed up an audience of mostly mid-life and senior Philadelphians, and then left them to their own devices for the midnight ritual. Joy is quite a different emotion from the sensory overload that currently passes as pleasure, and Nero was quite determined to achieve the former effect, a welcome contrast to the almost obscene rap music that at least one TV station activated to herald the arrival of 2011.

For some jazz aficionados, listening to an orchestra of this caliber working up standards on a grand scale in concert can be a natural high. The Pops' corps of instrumentalists includes sterling members of the Philadelphia Orchestra and show orchestras, seeded with a great rhythm section and some terrific jazz players like bassist Mike Barnett; saxophonists Ron Kerber and Joe Rotella; trumpeter Ken Brader; and trombonist Brian Pastor. It's always remarkable to hear how the Pops maintains the precision of a world-class orchestra while swinging in the best jazz tradition. Add to that Nero's piano virtuosity and Gravitte's ability to spice up Broadway-style singing with a nuanced jazz sense, and you've got the makings of a memorable feast of holiday fare.

The concert began with Gravitte gently singing the obvious "What Are You Doing New Year's Eve?," followed by a swinging "This Could Be the Start of Something Big," recalling the upbeat trombone rendition on J.J. Johnson and Kai Winding's Jay and Kai (Prestige, 1954). A familiar orchestral arrangement of Gershwin's "Strike Up the Band" was followed by Gravitte channeling Barbra Streisand in "Don't Rain on My Parade."

The orchestra did Jerome Kern's "All the Things You Are" as a suite with variations, an approach to the standards favored by Nero. It began with a contrapuntal recitative by the woodwind section leading up to lyrical solos by trumpet, French horn, and oboe respectively. Then Nero came on with his always phenomenal piano improvisations, backed by the rhythm section and strings, with Nero's nods to Erroll Garner and, by contrast, a superb baroque-style contrapuntal fugue that brought to mind the startling executions of the late, great Bernard Peiffer. The Kern composition concluded with a Count Basie/Frank Sinatra-style big band feel.

The mood shifted with Glenn Miller's lilting version of "Moonlight Serenade," further contrasted by Gravitte's passionate rendition of "Don't Cry for Me Argentina" and a lively number from Mama Mia, "Dancing Queen." Then back to the swing era with Count Basie's "One O'Clock Jump" in the mode of the Count's first big band. As in the original Basie band, a rifle of solos by (in this case) trombone, alto saxophone, trumpet and bass led up to a church-rocking chorus by the entire saxophone section.

Another contrast was John Williams' memorable "Music from E.T.," rendered in his accustomed large-scale symphonic ambience. Gravitte came on with the title track to her Defying Gravity (Jay, 2006). The serious part of the concert ended with Nero's own "Portrait of Richard Rodgers," which quoted a multitude of Rodgers songs, spotlighting the prolific output of hits that made Rodgers such an icon of American musical theater, not to mention the jazz repertoire. The evening then went into party mode, finishing up with light humor and audience participation with clapping, honking, and some few gutsy folks getting up to dance.

The Pops thus ushered in the New Year with an ongoing repertoire that both evoked appreciation in its audiences and honored excellence in music-making and stylistic diversity. Nero's incomparable piano mastery served to highlight the virtuosity and adaptability that so many of his orchestra members exemplify. The only concern, a recurrent one for the Pops, was that not enough of the younger generation was present to enjoy what Bernstein called "America's Classical Music," namely jazz and its cousins—film and show music. This is not the fault of youth. As DJ Bob Perkins has pointed out, the generations that made jazz the pop music of the time dropped the ball when it came to sharing their love of this music with their children. If there is a lesson to be learned from the Pops' first ever New Year's Eve concert, it is that America does not sufficiently pass on its valuable traditions and ideals to future generations. Perhaps it should go on our collective lists of New Year's resolutions to rectify that situation.