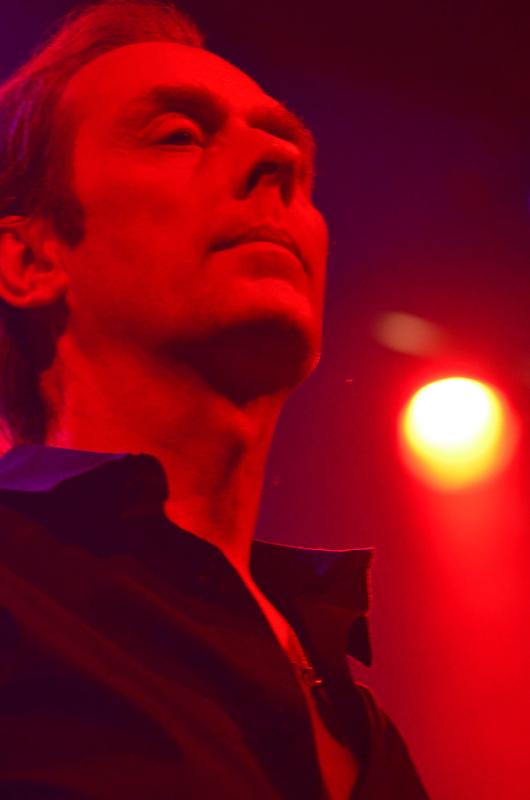 The cold biting wind, a short holiday get-away week—even the presence of two opening acts—did not deter legions of Peter Murphy fans, both old and new, from his gig at the iconic East Village club, Irving Plaza. The ever-busy Murphy is coming off an action-packed 2011. The former front man for Bauhaus signed with Nettwerk Music Group at the beginning of March this year, and kicked off a 29-city US tour that lasted until early April. When Ninth (Nettwerk, 2011) was released in June, Murphy took to the road to give fans the chance to get up close and personal by doing 10 in-store or small venue appearances, performing new material created with producer David Baron in a converted upstate New York studio now serving as a recording studio.
Murphy filmed three videos with director Justin Coloma for songs off Ninth, including "The Prince and Old Lady Shade," "I Spit Roses," and "Seesaw Sway." A full European tour supporting the CD filled up his daybook for the entire month of October. Additionally, a Dali's Car EP called InGladAloneness was completed prior to bassist Mick Karn's passing in January 2011 and is due to be released next year. When Murphy and his band touched down at Irving Plaza, he was also hitting his stride, commanding full attention in this, his sixteenth stop in North America out of a 31-city tour. It's a wonder that Murphy ever sleeps.
New York City-based Hussle Club and the hybrid post-punk-meets-dance duo of Justin Warfield and Adam Bravin, better known as She Wants Revenge, warmed up the audience, which danced while staking out spots on the crowded general admission floor and the upper level VIP sections. Hussle Club played a solid set, hitting the stage at 8 pm to an enthusiastic hometown crowd, which set the tone for the evening, providing an energy that the post-punk band returned right back at them. She Wants Revenge, complete with support from guitarist Thomas Froggart and drummer Scott Ellis landed on the small square stage at 9 pm, and won concert-goers over quickly, playing songs like "Sister," "These Things," "Tear You Apart" and "Take The World."

The highlight of the evening was, however, Murphy's appearance onstage. At 54 years of age, the long-ago-dubbed "Godfather of Goth" cut a lanky, lean frame on the hardwood floor, dressed appropriately for his old nickname, in a dark stylish jacket, dark long sleeve button down with subtle embellishments on the back, black pants and a black belt. His unbridled enthusiasm belied his age, as he preened, swan-dived in yoga-like poses and covered every inch of ground over the entire stage for the duration of his 80+ minute set. "All Night Long" started things off, with Murphy engaging his fans with a haunting performance of an old favorite. Murphy's very tight band kicked things into high gear. Longtime guitarist Mark Gemini Thwaite deftly made his job look easy and was an intense fixture to Murphy's left. Nick Lucero secured the beat from his vantage point at the drum kit at the rear of the stage, while Emilio China took on the daunting tasks of electric violin and bass guitar with ease.

Still striking, with exquisite cheekbones that garnered him attention in the notable Maxell Cassette television commercial from the '80s, Murphy turned in pounding, heart-racing versions of material from Ninth, including a throbbing "Peace to Each" and an energy-laden "Velocity Bird." The crowd cheered as "A Strange Kind of Love" morphed into the Bauhaus classic "Bela Lugosi's Dead." Crowd-pleasers like "I'll Fall With Your Knife" were welcomed, as well as a revisit of Bauhaus' "Too Much 21st Century," on which Murphy changed the lyrics to "too much New York City," resulting in shrieks and catcalls. Like an iPod set to shuffle mode from a lifetime of Murphy's discography, the set jumped decades to include the numbers "I Spit Roses," "Silent Hedges" and "Subway." A melodic and surreal "Gaslit"—a mainstay from the EP The Secret Bees of Ninth (Nettwerk, 2011)—fit beautifully into the set. "Deep Ocean Vast Sea" fueled the audience, along with "The Prince and Old Lady Shade." Written by Murphy and Thwaite, "Uneven and Brittle" was a peak moment of the show and closed the set.

A healthy supply of encores followed as Murphy arrived back on stage after a quick shirt change, donning a white long sleeved romantic shirt. "Marlene Dietrich's Favourite Poem" was up first. "Cuts You Up" brought the energy back up and a strong finish came in the form of "Ziggy Stardust"—a version that rivaled David Bowie's classic.

Coming off a year of creativity, live performances and lots of miles logged in by tour bus, who knows what Peter Murphy will bring out of his bag of tricks next?