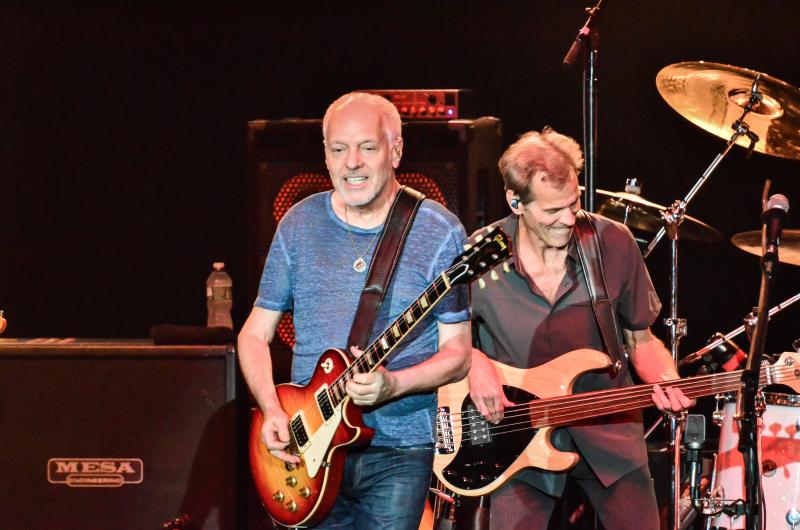 Frampton Comes Alive! (A&M, 1976) and Live At Budukan (Epic, 1978) are two of the most iconic live recordings of the past 40-or-so years. As such, it's only fitting (and inevitable) that Peter Frampton and Cheap Trick would eventually mount a potent co-headlining tour. In 2015, that eventuality has finally come to pass.

In the midst of a blistering New York heatwave, on the hottest day of the year (up to that point) it was cool, both figuratively and literally, inside Huntington, NY's Paramount.

The evening's performance began with an opening audio and video montage followed by what has become this classic quartet's usual recorded introduction and calling card, "Ladies and Gentlemen, Boys and Girls, please welcome to the stage, the best fucking rock 'n' roll band in the galaxy—Cheap Trick!" Opening with a grouping of songs that comprise the majority of side 1 of the Live at Budokan album—"Hello There," "Come On, Come On," "Big Eyes" and "Lookout." Other staples from the band's breakthrough live release—the Fats Domino cover "Ain't That A Shame," "I Want You To Want Me" and "Surrender"—would make their appearance throughout the slick, high-energy rockin' set.

Fans of the cannot help but remember the cover of 1979's Dream Police album (Epic Records). The band appeared in white police uniforms. On this evening, rhythm guitarist and lead singer Robin Zander chose to dress in black leather pants, a motorcycle jacket featuring a "Dream Police" patch on the right shoulder, a black t-shirt and a black police cap featuring a star. Though the true meaning of Zander's ensemble remains unclear, the audience was left to sort that out for themselves. Lead guitarist Rick Nielsen, dressed as he normally does—a shiny black sports jacket over a t-shirt (on this night the t-shirt features Nielsen's own likeness), a baseball cap and converse all-stars. Bassist Tom Petersson, as usual, appeared in jeans and a long jacket while sporting a scarf at his neck and stylish glasses. Drummer Daxx Nielsen (yes, he's Rick's son) was dressed for comfort in jeans and a black t-shirt on which the letters spelling "New York" dripped down the front.

Cheap Trick's performance was highlighted by the ferocity and intensity of the music, by Zander's vocals and by Rick Nielsen's energy, sense of humor and the absurd (on the neck of one of his guitars, between and over the frets, the words "Gonna Raise Hell" was spelled out in black letters), and propensity to flick and toss guitar picks to fans with an amazing pinpoint accuracy. Another highlight was Petersson's lead vocal on the Velvet Underground classic "Waiting For the Man." The band closed out it's wild, fierce and powerful performance with powerful versions of the ballad "The Flame." "I Want You To Want Me," "The Dream Police" (after which Rick Nielsen thanked Peter Frampton), "Surrender" and "Gonna Raise Hell." The entire seventeen song performance was over in a flash—they came, they played, they conquered—and they were gone.

It's hard to follow an act as tight, forceful, fun and entertaining as Cheap Trick. Only top flight musicians can do so with any measure of success. Peter Frampton is one such musician. His performance on this evening was masterful.

For the uninitiated, Frampton is a Grammy Award-winning (for Best Instrumental Album—2006's A&M release