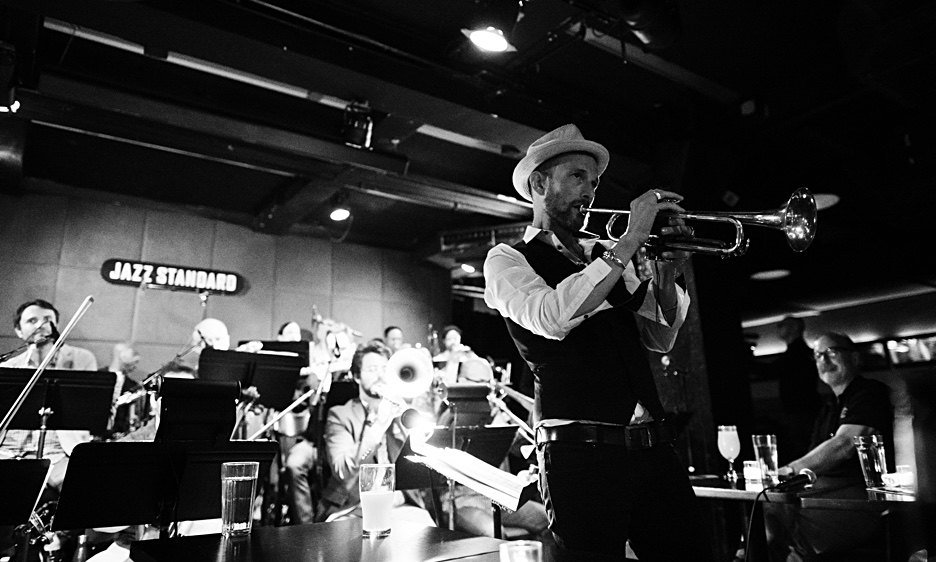 Trumpeter Peter Evans is a very familiar figure on the extreme scene, but the percussionist and electronicist Levy Lorenzo will be a new name to most folks. The pair have been jointly penning compositions, but these nevertheless have the feel of ambient improvisations. It's a continuation of the collaboration that began on 2018's Q album, released on the More Is More label. Their entwined roots lie in ICE (International Contemporary Ensemble), from 2016 onwards. Lorenzo is well into instrument-building, and his cluttered table-array suggested that he could also be immersed in cookery, as well as music-making. He had closely-miked jars-of-rattle, bongos and multiple malleted gongs, whilst Evans sung through his siren pocket horn, or grumbled through his muted full-sized trumpet, sometimes with its mouthpiece removed. The pair played out on the Roulette floorboards rather than up on its stage. Walls quaked with deep bass emanations, sourced from percussion, enhanced via electronics. Indeed, it was difficult to discern which were the 'organic' sounds, and which were the captured tweakings. The aura was 'new music,' but with strands of global-ethnic rainforest and tenement jazz free-forming. It was particularly gripping to catch Evans in yet another unfamiliar guise, revealing another aspect of his wandering sonic interests, scattering sharply, or splutter-droning deeply, with a wide palette of expression. The duo played a relatively short single set, but its musical content was rich and compacted with fine detail.

The following night offered a completely different angle on the trumpet, with Michael Leonhart fronting his Orchestra in its ongoing monthly residency at the Jazz Standard. Their early set presented Leonhart's compositions and arrangements, shaking between The Painted Lady Suite and a sequence of Wu-Tang Clan treatments. The leader entered from the rear of the club, blowing his horn as he took his conducting place amongst the front rows of tables. Leonhart prompted solos and section parts, moving through three parts of his own Painted Lady, taking his own trumpet showcase, with bass flute responses, plus surf twang guitar parts. This band swings around a jazz pole, but its players are attuned to other genres, mostly of a soul-funk nature. A pizzicato cello feature headed up a speed-up, burnout trumpet solo, but this time from Dave Guy, followed by a bass flute spot by Dave Pietro and an acid violin solo from Pauline Kim. Leonhart's work with El Michels Affair led him towards the Wu-Tang related material, with "Shimmy Shimmy Ya" being the ultimate highlight, and "Liquid Swords" also benefiting from a bass trombone solo, whilst a riff continued on baritone saxophone. The set's final climax came with an arrangement of "Sham Time," by Eddie Harris, involving a sudden unexpected acceleration into dancing ecstasy.

The Claypool Lennon Delirium have been together for a pair of albums and an EP, guitarist Sean Lennon collaborating with bassman Les Claypool (of Primus), and sharing lead vocals. The line-up was completed by João Nogueira (keyboards) and Paulo Baldi (drums). The co-leaders were garbed similarly in pseudo- military (or bus conductor, or glam biker) chic, playing in front of a kitschy space opera painting-backdrop, barely bathed by extremely subtle, low-level stage lighting. Their song-sound is not so far removed from The Beatles, at times, formulating a quirky, humorous pop, blended with outbreaks of psychedelic heaviness, complete with high backing vocal refrains and a charmingly alternative vibe. Lennon's typically dry wit in-between-song patter found a foil with Claypool, so this isn't a band that keeps mouths mysteriously shut. Quite the opposite, as some of their rambling banter continued for several minutes, although never becoming tedious. It's got to be said that the set's highlights were actually the powerful cover versions of "Astronomy Domine" (Pink Floyd), "The Court Of The Crimson King" (King Crimson) and "Tomorrow Never Knows" (The Beatles).

There are other South Korean combos that are blending traditional sounds with jazz, improvisation, electronics and moderne composition tendencies (Black String, E-Do, Tori Ensemble), but Seoul's Jambinai are the folks who have chosen alternative rock as their primary conduit for action. They quite cleverly manage to frame what are ostensibly traditional acoustic instruments within a surging surround that would not be out of place during a Mogwai gig. Jambinai even occasionally leap into the almost-thrashing metal arena. Whatever transpired, their sound mix was set up so that intense distortion fields didn't overly submerge the delicate string or vocals sounds. The elements were overlaid like transparent leaves. Three core members are joined by touring additions for bass and drums. Sim Eun-yong played geomungo (a koto-like string instrument), Kim Bo-mi handled the haegeum (similar to the Chinese erhu fiddle) and Lee Il-woo shifted between guitar, laptop,and piri (a small bamboo flute). Some of the rock moves had a shiny 1980s shell, notably in the drama-infused group vocals, but this was frequently offset by their mottled carapace of fuzz. There was also an ultra-rare sighting of John Zorn in the audience, actually taking a break from prolific composing, to attend another artist's gig.

A more obvious guest appearance at this gig was made by Steve Reich, who came up onstage to enjoy applause for his 1981 work, "Tehillim." Axiom is a house ensemble at the Juilliard School Of Music, formed in 2006, their mission being to perform a repertoire of relatively moderne works. Axiom were conducted by Jeffrey Milarsky, who is also their founder. In a short programme, the Reich piece was preceded by items from Iannis Xenakis and the lesser-known Caroline Shaw.

Unusually, "Okho" (Xenakis) was written for three West African djembe drums, in 1989. Compared with his other more labyrinthine percussion pieces, this seemed quite directly repetitive, lying closer to the character of these drums in their natural setting, rather than within the environs of moderne composition. When mentally compared to the manic interlacing of an exceptional Afro-drumming posse, it sounded somewhat conservative.

"Entr'acte" (Shaw) employed a string quartet for its subtle development, but ultimately the pair of opening pieces were lightweight when set beside the climactic Reich epic. An enlarged Axiom delivered the vocal and percussion dominated composition "Tehillim," one of Reich's classics. It was tackled with gusto in this instance, even if the amplification on the four vocal microphones didn't sit well in the acoustics of this hall. Even so, the nimble six-piece percussion interlocking provided a lightly snicking and chittering mesh of sonic subtlety.