Any review of Peter Brötzmann's Full Blast Trio tends to be liberally spattered with words like blustering, explosive, aggressive and fiery, testament to the raw power and energy channeled through this threesome in their short existence. Not that the German reed iconoclast was a shrinking violet before. Ever since his emergence on the international jazz stage with the earth shattering Machine Gun (FMP, 1968), rightly or wrongly, Brötzmann's name has been synonymous with lung rasping excess. Age has not entirely mellowed him. Now aged 69, Full Blast is one of his most uncompromising units, built on the relentless metal thrash of Swiss drummer Michael Wertmüller and Greek electric bassist Marino Pliakas. 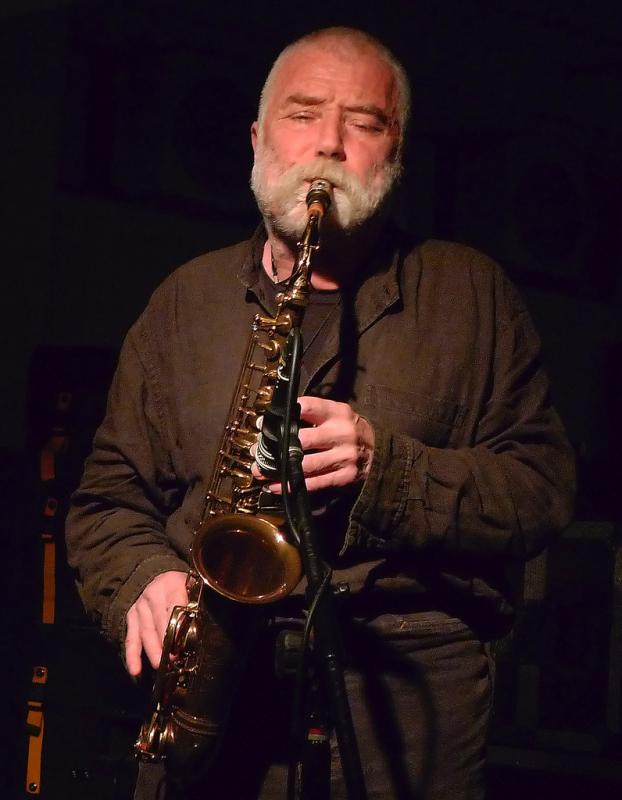 If the three on their own can conjure thoughts of apocalypse, what would the addition of Chicago-based reedman Ken Vandermark produce? That was the question answered over two nights at Dalston's Cafe Oto at the end of September. The American was still in town following the conclusion of the Vandermark 5's successful tour with Atomic. Brötzmann and band flew in the day of the first concert. For both men this was their third time in London this year. Lovers of free jazz and improvisation are living through a mini golden age in North London, with the Vortex and Cafe Oto, separated by no more than a few hundred yards, vying for audience with a string of must see shows. Brötzmann had started the year with a three day residency at Cafe Oto, returning for two days with his Hairy Bones Quartet at the Vortex in March. Prior to the double tour, the younger man's previous appearance was a two day residency at Oto in duet with drummer Paal Nilssen-Love in April. All had done the business in terms of crowd size as well as artistic endeavor, so it was no surprise that there was a standing room only crowd for this performance.

For an opening gambit, the twin horns closely shadowed each other, starting and stopping in unison—Vandermark on tenor saxophone and Brötzmann on alto. As the German hit a high note, the American entered spurring him on with a brief falsetto ululation, intertwining above Pliakas' gut rumbling bass judder and Wertmüller's wall of sound drums. In fact Vandermark often weighed in to supercharge the older man's climactic fury, while Wertmüller stoked the fires to unbearable levels, only to pull back to allow the saxophonists another run. During the Chicagoan's ensuing tenor solo, there was a neat touch of synergy as Wertmüller accented the reedman's repeated motif on his snare without missing a beat in his rhythmic fusillade. It was a game of tag, though one in which Brötzmann stood unperturbed while Vandermark strained with his eyes clenched tight.

But it wasn't all powerplay. At one point Vandermark layered long sustained clarinet tones atop Pliakas' rippling bass drone to initiate a wonderful duet, with squiggling overtones squirting around the thick-toned bass. Eventually Wertmüller and Brötzmann joined the fray and inevitably the intensity increased as the drummer's inexorably building drum roll and older man's elegiac alto saxophone hymnal thickened in burry incandescence behind the yelping clarinet. Another moment of delicacy came later in the same piece. Brötzmann was left to soliloquize, his grainy lines full of slurs and inflected cries carrying a huge emotional heft, with Wertmüller offering shouts of encouragement from behind his kit.

Brötzmann still had some new tricks to reveal among his familiar arsenal, like in his solitary introduction to the fourth number the German nuanced his breathy wide-toned tenor with a multiphonic edge, so it sounded as if he was blowing two horns simultaneously. Earlier broadening his already wide vibrato, the grizzled saxophonist shook his head from side to side, worrying his reed like a dog might a bone, to generate a rapid tremolo inflecting his stream of notes with color. Perhaps as the result of such treatment, he needed to change his reed between every piece.

Vandermark's presence altered the balance of the band so that this wasn't just Full Blast and guest, but actually another, different entity. At times they drove each other to apocalyptic frenzy, the German's tenor interweaving in the upper partials with the Chicagoans clarinet to create music of the gods, phrasing and breathing together before their paths diverged, attesting to prolonged shared experience in Brötzmann's Chicago Tentet and Sonore, the band which gives independent life to the reed section from the larger group. Vandermark's penchant for organization bleeds into whatever he does, imbuing even seat of these pants extemporizations with structure, sometimes through his riffing, but others through a loose fugue like echo. However it was still very much the German's band and it was he who was responsible for cuing simultaneous endings, almost levitating as he swept his saxophone towards the ceiling then suddenly down to close proceedings. 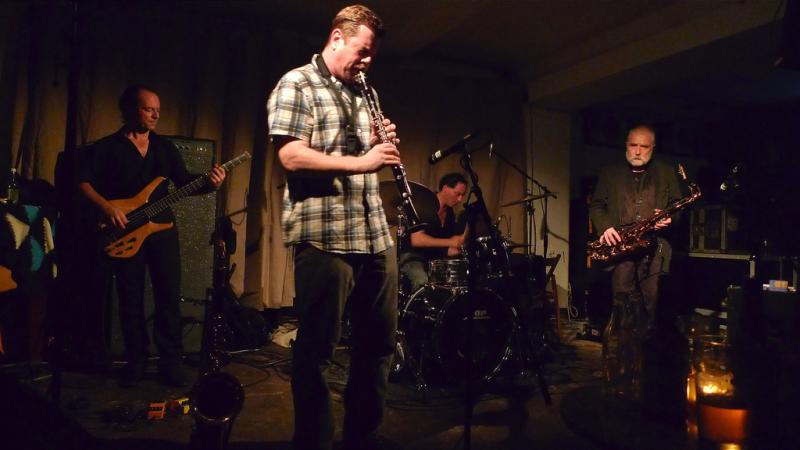 In combination Wertmüller and Pliakas demonstrated a strong dynamic sensibility: their start to the second piece featured elongated pauses between bursts of sound, before the on/off tattoo began to coagulate. Drums and bass were as much felt as heard. In particular Pliakas, whose bass fed into an amplifier stack which towered over him, utilized an army of effects pedals to vary the gravity of his extreme textures. But even here there was light and shade. For the beginning of the third piece, the bassist used a vibrating toy to create a high pitched humming buzz, over which the reeds essayed a rubato ballad.

Wertmüller must be one of the most powerful drummers around: the floor reverberated much of the time in sympathy with their playing reaching about 6.5 on the Richter scale. However rhythm section would be a misnomer for this pairing as they don't deal in meter in the conventional sense. Soundscapes more reminiscent of industrial processes or an oncoming locomotive than jazz bass and drums were the norm, giving the music a distinctive primal texture, and acting as backdrops rather than overt interaction with the front line. Even the Swiss was more likely to concentrate on a single part of his kit, starting a roll on his snare at the limit of audibility and then gradually increasing the volume until it roared like a tidal wave.

Four collectively generated improvisations made up an intense hour's show which was followed by a ten minute encore which captured the set in microcosm. Starting with overblown dissonance from Brötzmann's alto and Vandermark's clarinet braided into one voice, the trajectory was towards transcendence and an impassioned climax, ended abruptly on Brötzmann's cue. All the initial descriptors held good, but a few more words come to mind to sum up the evening: exhilarating, focused, cathartic. Fantastic.