As the crowd gathered outside north London's Cafe Oto waiting for the doors to open, a solitary figure stood spotlit under a streetlamp just up the road. German saxophone iconoclast Peter Brötzmann was savoring a moment of calm reflection, smoking on a cigar, alone with his thoughts and the cold night air. Such quiet made for a stark contrast to the squalling tumult soon to be unleashed indoors when the grizzled reedman held sway, in the company of bassist John Edwards and drummer Steve Noble. 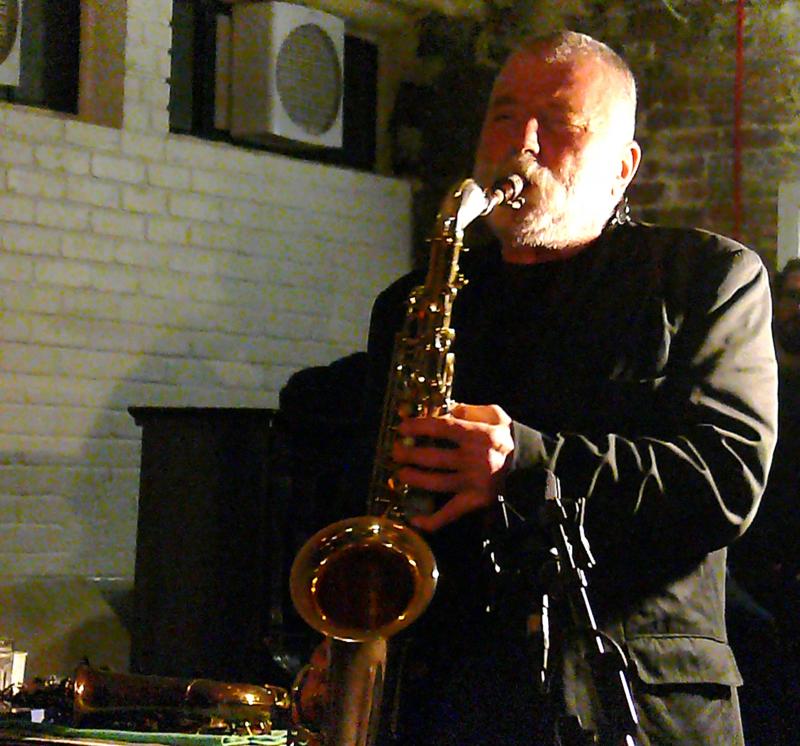 An already stimulating program at Cafe Oto has been supersized by a series of residencies which see an internationally renowned artist present in assorted ad hoc settings for two or more nights. Having successfully hosted Joe McPhee and Tatsuya Yoshida in 2009 the venue kicked off the New Year in formidable style with Brotzmann in residence for three nights at the end of January.

Edwards was a holdover from previous evenings, when the bassist had been joined by Tony Marsh behind the traps and further guests keyboardist Pat Thomas and trumpeter Roland Ramanan rounding the saxophonist's outfit out to a foursome. In addition Brotzmann had played brief solo sets before a longer group exploration. Tonight there was to be full-blooded ensemble fare only, with two slabs of unpremeditated uncompromising invention totalling some 80 minutes.

Although in his sixty eighth year, Brotzmann shows no signs of slowing down. A fearsome schedule includes his Chicago Tentet and various sub-groupings such as the all reed Sonore and a quartet with McPhee, as well as his ferocious Full Blast Trio and Hairy Bones Quartet reuniting him with trumpeter Toshinori Kondo, all of which have issued releases within the last year. On top of these established outlets, the reedman's peripatetic streak sees him travelling the globe to make music with a stunning range of collaborators, as evidenced by more releases with Arab and Japanese musicians. It was this irregular strand of his activity on show tonight.

Brotzmann starts from the place where most other saxophonists climax, and just keeps on going from there. So no surprise that the first set opened with a characteristically paint stripping alto saxophone clarion call, abraded by a sandpaper arco drone from Edwards and Noble's roiling drums which conspired to construct a churning stasis. From the outset the reedman's stamina was astonishing, building shriek on raucous shriek, in an exhibition of unremitting intensity. In such circumstances Edwards was forced to resort to a hyperkinetic strum just to hang on. At last the tension broke and Brotzmann subsided, like a passing storm, allowing some respite for the rhythm team. Edwards began a slow walking pattern sidling up and down his fretboard, while Noble, freed from stoking the fires prospected texture, striking cymbals placed on his drum heads for increased resonance, in loose time. This cycle of sustained coruscating assault followed by (relative) tranquility, with the German's reeds giving way to bass and drum interplay set the template for the performance. 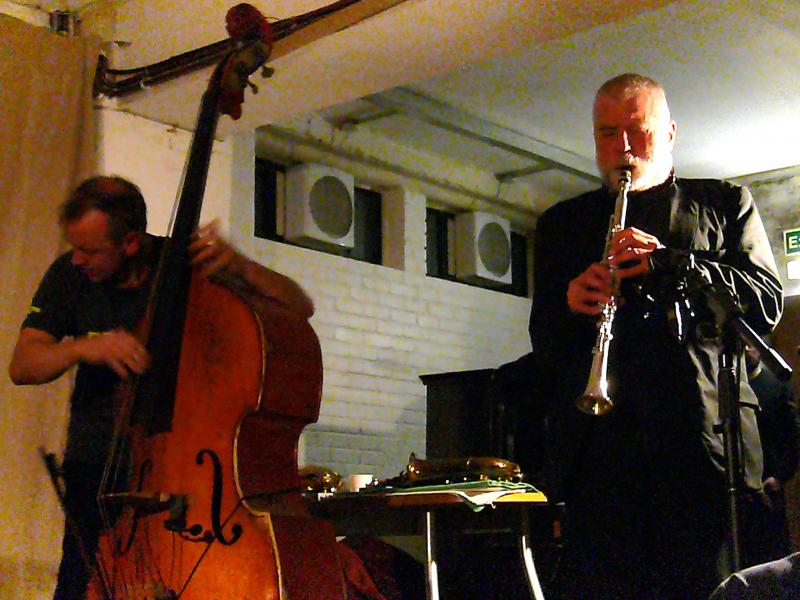 With the ear inevitably alighting on what stands outside the norm the passages which stand out in memory were those which contrasted with the prevailing high energy wall of sound. Two particular sections in the second set were among the highlights. First was a Brotzmann cameo, emerging from the aftermath of another incendiary episode. As the pulse became more relaxed, the reedman embarked upon a bucolic stretch of gruff lyricism, eventually musing acapella variations around his elegiac "Master Of A Small House" theme, committed to disc on Tales Out Of Time (Hat Hut, 2004). His wide quivering vibrato allied to controlled power added layers of harmonic overtones, heightening the impact of an already passion-drenched declamation. When Brotzmann suddenly tightened his embouchure, narrowing his tone, that was just the signal Edwards and Noble needed to resume, calibrating position for yet more breakneck furore.

Though not his most frequent band mates, the German has hitched his star to Edwards bass an number of times in the past, appearing as a guest with B-Shops for the Poor as far back as 1991. Edwards has come a long way since then, having become almost ubiquitous on the London scene, and a fixture at European festivals. Evan Parker is a regular colleague and the bassist can be heard most recently on the saxophonist'sHouse Full of Mirrors (Tzadzik, 2009). Noble is a regular rhythm section partner, and the two supported McPhee at his residency . Together their brand of freeform rhythmic alchemy can be heard on a stream of recordings with the likes of Alan Wilkinson, guitarist and clarinetist Alex Ward and Alexander Hawkins.

In fact they were responsible for the second stand out passage. It began as Brotzmann turned away at the end of another blistering workout, leaving Noble to develop a solo transition. Using first maracas, then a shaker to maintain the flow, he evoked a serendipitous accident in a bell factory, crashing cymbals together, then holding them just above his drum heads to modulate and vary the reverberation, all purveyed with a crisp propulsive snap. This fascination with the clang of struck metal is one of the most distinctive and appealing aspects of Noble's percussive profile, in bountiful evidence throughout. After a few minutes Edwards began to accompany the drummer, scraping his bow below the bridge in creaking counterpoint. As the pyrotechnics ignited, the bassist deployed the handle of his bow to extract a frenetic elastic twanging as he plucked, developing repeated patterns to impart momentum to a duet which elicited whoops of approval from the packed house. 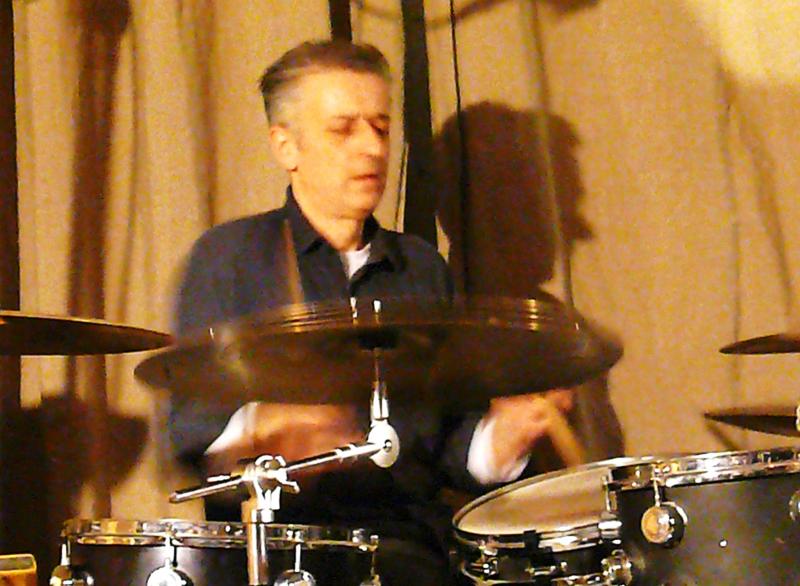 As it happened the entire evening drew enthusiastic response from the predominantly young standing room only throng. Though they entreated the trio for an encore they were rewarded only with reiterated bows until Brotzmann was moved to a short speech, thanking the musicians, Cafe Oto, and finally the audience for coming out in such numbers. Such a reception bodes well for future residencies, with a mouth-watering program in store featuring Matthew Shipp, McPhee (once again) and the Sun Ra Arkestra over the succeeding months.