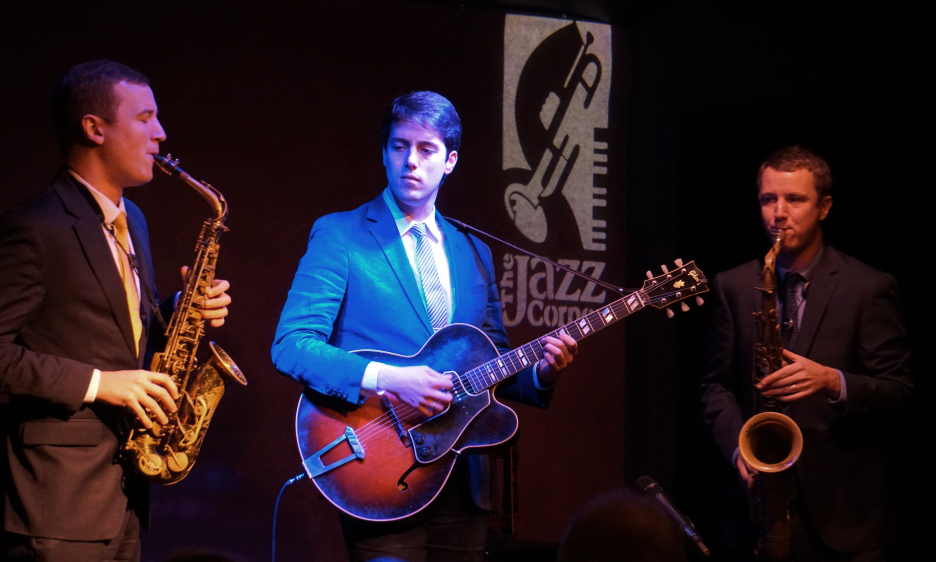 Peter and Will Anderson have been playing The Jazz Corner for the last six years and for these two nights they were joined by guitarist Felix Lemerle. Over that time, they have become more secure in their playing. In their early performances, they pushed out an impossible torrent of notes, barely taking time to breathe. Now, they give almost every note its full weight and importance, varying the tempi to a far greater extent.

The identical twins are easy to tell apart, Will is an inch taller and ten minutes younger. As identical twins, it may be that they have some special bond of understanding which helps them to play together so tightly, but equally, they still had to do all the work and study to get to their level of excellence. When they play in unison it is a joy to hear and apart, they pass the tune from one to another seamlessly. The Andersons are from Washington, DC and Lemerle came originally from Paris. They all studied together at Julliard and now reside in New York City. After Hilton Head, they were driving to Naples, Florida, heading in the right direction to avoid the January cold in the city.

Will played alto saxophone, flute and clarinet while Peter played soprano and tenor saxophones and clarinet. Lemerle carried the rhythm on guitar but often took off on solo sections while the brothers provided a low background buzz accompaniment.

Notably, they strayed into the classical repertoire with the 1913 Claude Debussy masterpiece "Clair de Lune," the clarinet playing the haunting theme normally reserved for piano while the guitar walked a bass line. Then they surprised by switching up to a jazz rhythm with a slow guitar solo, then doubled up for solos by the reeds and went back to a slow swing to repeat the theme before a long fade to a precise finish. Next, they played a discordant 1928 tune "The Mooche" by fellow Washingtonian Duke Ellington. One of their heroes is Benny Goodman, in tribute to him they played "AirMail Special," "Sing, Sing, Sing" the classic tune of the Big Band era written by Louis Prima in 1935 and from the same year the Gordon Jenkins song "Goodbye."

From Broadway came Irving Berlin's "Cheek to Cheek" written for the master dancer, choreographer and perfectionist Fred Astaire which they played on flute and saxophone in a slow lilting style which Lemerle made swing gently. Another show tune from "The Sound of Music" was the Richard Rogers favorite "These are a few of my favorite things" played by both saxophones. They returned to the classical genre with Gershwin's orchestral masterwork, the clarinet soared up to lead them away into "Rhapsody in Blue." They worked hard to replicate the orchestral theme with only a trio but the audience appreciated their effort. "Do you know what it means to Miss New Orleans" took us down to Mississippi, to hear a fast "After You've Gone" from 1918.

This was a full program with a varied presentation by an ever improving young trio. They played tightly and professionally together. They were rewarded with warm applause from a now familiar audience.