By DAVID A. ORTHMANN
July 30, 2008
Sign in to view read count
In an era when serving a lengthy apprenticeship in a working band is no longer an option, young players who shun fashionable pop-influenced sounds in favor of traditional jazz styles must be very resourceful. Thirty-year-old drummer/composer/bandleader Pete Zimmer balances a desire to extend the modern straight-ahead mainstream into the twenty-first century and the ability to support his ambitions by taking care of the business that surrounds the music. Shortly after arriving in New York City in 2001, Zimmer put together a band of like-minded peers, found a substantial amount of work, and began releasing records on his Tippin' Records imprint.

There's no shortage of people carrying the torch for the range of hard bop styles that originated in the 50s and 60s; Zimmer and company are better at it than most. A stable core of personnel includes significant young voices such as trumpeter Michael Rodriguez, pianist Toro Dodo, and bassist David Wong, as well as veteran tenor saxophonist Joel Frahm. Zimmer's first three releases, Common Man, Burnin' Live at the Jazz Standard, and Judgment are largely comprised of original compositions by the leader and his sidemen. "Getting Dizzy," "Common Man," and "Road Taken" are good examples of Zimmer's ability to write memorable melodies and evoke a variety of moods. 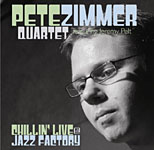 Whether it's Latin, boogaloo, or straight-ahead swing, a decisive, well-defined groove is the defining characteristic of Chillin' Live @ Jazz Factory, Zimmer's latest release. Trumpeter Jeremy Pelt and guitarist Avi Rothbard join Zimmer and Wong in producing a record that's somewhat more relaxed and spare then the Quintet sides. Pelt and Rothbard are fine soloists who have something interesting to say on every track. However, it's the hookup between Zimmer and Wong that makes Chillin' something special.

Zimmer's composition "Summer Somber" is a waltz taken at a slow-to-medium tempo. The bassist and drummer create a pulse that's forthright, unpretentious, and contains just the right amount of grit. The music swings persistently yet gives the impression of open space. On a middling tempo rendition of Sonny Rollins's "Doxy," it's easy to lose yourself in the steady push of Wong's walking line and Zimmer's ride cymbal. The bassist and drummer tighten the groove ever so slightly in the middle of Pelt's solo, and Zimmer doesn't feel the need to jump in and react to a long, repetitive sequence by the trumpeter.

The drummer goes full tilt at the onset of "Search." His lively Latin rhythms include moments of silence and they set the tone for the rest of the track. Zimmer's boogaloo treatment of Kenny Dorham's classic line "Una Mas" entails precise straight eighth note patterns on his "wet" and "dry" sounding ride cymbals. While staying in the pocket he executes neat snare and tom-tom combinations behind Rothbard's soulful, effusive melodies. The drummer's snare accents subtly propel the head of an update of "Common Man." Amidst Rothbard's chords and single note lines, Zimmer tucks accents under the dry ping of the ride and shoehorns in some multiple stroke fills. He plays straight, unobtrusive time during Wong's solo on an up-tempo rendition of Cole Porter's "From This Moment On." When the bassist resumes walking in the final sixteen bars, you catch an unvarnished view of their extraordinary rapport.