Pete Townshend: Who I Am

By DOUG COLLETTE
January 12, 2013
Sign in to view read count 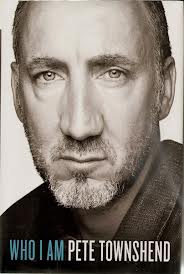 Guitarist Pete Townshend's autobiography is an engrossing, memorable read, due to the rigorous discipline Townshend applies to his writing, comparable to that which he devoted to his greatest music.

Nevertheless, anyone looking for the comprehensive story of this man's life is not going to get it. Not that its generally broadminded and clear-eyed recollections, particularly in the early portions, aren't enlightening and informative.

But the titular leader of The Who has spent so much time during the course of his public life explaining himself and his work, through interviews, magazine articles, liner notes to reissued recordings and particularly in later years, on the worldwide web, it's arguable even the thousand-page manuscript from which this tome is taken would fully capture the life of a man who continues to regard his life as a work in progress.

That evolution is crucial in appreciating Who I Am for what it is: a collection of moments culled from throughout its subject's life that have been, in turns, more and less significant over the passage of time. Certainly, Pete Townshend's state of mind in recent years, as self-serving as he can still be, is a far cry from the bitter, defensive man that, a few years ago, so stridently defended the use of his songs on television series. Pete Townshend has learned to accept, if not fully embrace, the unanticipated events he recounts in this book.

Who I Am ultimately works best as a starting point to learn about the various and sundry activities in which Townshend has been engaged, personally and professionally, during the course of his life. To both long-time aficionados as well as newly-devoted fans of the man, the five hundred pages may be ultimately disappointing in terms of detail, despite the fact it begins promisingly enough in accounts of his life as a child. The timeline of The Who's coalescence is carefully plotted and well clarified in terms of the personalities involved, especially insofar as the band unified around vocalist Roger Daltrey: Townshend's reticence to assume too much in his creative leadership of the band goes by the way after the success of Tommy (MCA, 1969), in part because Townshend quite clearly takes some pride in the ascension of the singer to superstar status as the title figure.

The creative gestation and presentation of the rock opera (in all its various forms) gets more detail than that given to the "Lifehouse" project that succeeded it, from which ashes arose the watershed album Who's Next (MCA, 1971). The scope of Townshend's grand ambitions in both projects deserves more analysis and it is available, though not in this publication. Townshend's essays for the CD reissue of both those albums are equally objective and insightful.

A similar scrutiny is missing of even the later periods of Who history and not surprisingly: the author sounds as reticent to speak of those phases of the group's career, including The Who By Numbers (MCA, 1975) and Who Are You (MCA, 1978), as he seemed to be to embark upon reunions in later years (even the one suggested by long-term manager Bill Curbishley as a means of restoring bassist John Entwistle's finances).

ADVERTISEMENT
The way Pete Townshend describes intrusions from The Who into his activities after the 1982 farewell tour might be more than a little curious, if it didn't ultimately illustrate how his ambivalence about the band grew in proportion to his disillusionment with them because they (and rock musicians at large) were not able to lead the cultural paradigm shift he envisioned. Still, it's startling to hear Townshend's almost implacable fatalism toward the death of drummer Keith Moon (not to mention Entwistle's on the eve of the 2002 tour): the near-coldhearted pragmatism, grounded in the business acumen Townshend actively nurtured over the years, ratifies the extent of the tenuous bond between the four members of The Who; the volatility of their interrelationships, as suggested in rumors and news over the years, was not understated in the least.

Townshend's view of The Who as an entity separate from himself may lend credence to suggestions the group's camaraderie was only superficial, but the picture Townshend paints of himself in Who I Am is nothing if not that of a man obsessed with (or addicted to) one thing or another, this groundbreaking band perhaps the most common object of his excessive fascination. If the author hadn't resigned himself long ago to the contradictions of his celebrity existence, tied inextricably to the group, he probably wouldn't have been able to write such a broadminded book as this, but rather a self-promoting screed, its publication timed to maximize its marketing potential coincidental with The Who's autumn 2012 tour.

References to other sources of information become increasingly frequent in Who I Am as Townshend delves into his time as a solo artist, collaborations in theatre and new media, as well as his almost accidental career as an editor for an English book publishing company. With such aforementioned content so readily accessible, Townshend has, depending on your point of view, either undermined his autobiography as a definitive work or efficiently streamlined it as a personal reminiscence filtered through his professional exercises. Certainly his reference to editing an original draft twice as long as the published work, piques curiosity and for that reason alone Who I Am may ultimately engender as much ambivalence in readers as it seems to in the author itself.

Recalling his efforts to balance his various roles of artist on his own, husband, father and businessman sound as painful as the emotional juggling act itself, though not so anguished as the recurring guilt in playing the rock star role to the hilt. It's as if Townshend knows all too well the limits of being at peace with himself and didn't pretend otherwise in writing Who I Am. That's why in the end it's worth reading, particularly between the lines, as the author repeatedly references a deeply-rooted suspicion of sexual abuse, hints at cosmic sources at the root of his creative drive and offers an account of the child pornography incident in 1999 (which is remarkably bereft of self-recrimination).

Having learned how to pick his battles, it remains little wonder this artist, at his advanced age and given the duration of his career as a musician, demonstrates virtually all the raging frustration on stage now that he did in the late 1960s. The cover graphics of Who I Am are thus perfectly appropriate, as it's bookended by a portrait of Townshend carrying a latent but unmistakable defiance in his facial expression and an action shot on the back, appropriately blurry, depicting his destruction of an electric guitar.