If you’re a Joe Henderson fan, this is a lesser-known must-get. 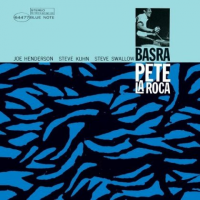 When drummer Pete La Roca recorded Basra in 1965, the Iraq war was decades away. Today, the name Basra evokes memories of the 2003 invasion. A recording called Basra in 2016 would probably make listeners think of Saddam Hussein. Not a good association. But in 1965? It was just an exotic-sounding, Middle Eastern name.

And that's exactly what the 10-minute title track to Basra sounds like. It begins with a heavy, pulsing bass. It features a meandering, haunting sax solo by Joe Henderson, absolutely without melody. This is modal music based on just a single chord. It is atmospheric and mysterious—mesmerizing, even. It is very, very far from the dominant hard bop and soul-jazz of the time.

Henderson is the star of the album, though he's not the leader, and he wears many faces. In the opening "Malaguena"—a Spanish-tinged tune that sounds a lot like Chick Corea's "La Fiesta"—Henderson is wild and feisty, with lots of squeaks and squawks. On the whispery ballad "Lazy Afternoon," he is soft and gentle. And on the closer, "Eiderdown," he sounds like your standard Blue Note bopster. If you didn't know better, you'd swear these were three different saxmen.

In fact, the entire album feels that way—like a collection of six very different tunes. "Basra" (the song) may be the centerpiece of the album, but it's not representative of the whole record. Yes, three tunes—"Basra," "Lazy Afternoon" and "Malaguena"—are modal-ish, with very little harmonic movement. So maybe that's a theme.

But the other three tunes are more conventional boppers. "Candu" has a modern soul-jazz feel. "Tears Come From Heaven" is a fast-paced toe-tapper, with nice piano work from Steve Kuhn. And "Eiderdown," an original by bassist Steve Swallow, could easily be a The Jazz Messengers workout. Throughout, the rhythm section is solid, while Henderson runs away with most of the best lines. If you're a Henderson fan, this is a lesser-known must-get. Otherwise, the real draw here is the title track—a long, unconventional mood piece that sounds like it was lifted straight from a Middle Eastern marketplace.