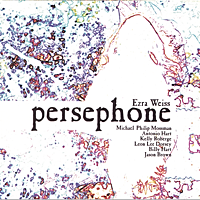 These young men who understand the point of playing hard bop do so here in a strongly compositional, mini-orchestral context. After a piano intro to "Lord, Give me Wings," Kelly Roberge's tenor saxophone is first up, a soft-toned asset to deeply crafted ensembles, congenial too in solo. The trumpet crackles, with telling, not showy piano support. Starting slow and in stillness, Antonio Hart's deep-voiced alto soon kicks in, this spirited invocation of the muses stronger yet for Billy Hart's workout on top of the band's reprise of the memorable rhythmic theme.

The padding drums/bass duo of Jason Brown (alternating throughout with Hart) and Leon Lee Dorsey lets Weiss relax on "Family Song." He doesn't play a lot of notes, but he includes several which most wouldn't think of. Mossman's a trumpeter capable of great heat and power, with no need to make much noise. I like the reeds' two-part harmony, Mossman's capacity to sound distant, the easing into a slow bump-and-grind rhythm, the altoist's expansion within, and near bursting out of, the whole set's dominant generally introspective context. He blares into the infinity of a slow fade, then on the next number up, "Winter Machine," it's almost Johnny Hodges over the small group and Billy Hart's throbbing drums. The trumpeter's on top, flaming, the bassist down below, Weiss doomy through an alto solo that builds intensity, then eases before the band intones concluding harmonies.

Brown's back on drums on "Capricorn," kindling a little bonfire. The altoist tries carefully to warm himself; Mossman's trumpet jumps around like fresh flame, the horns retire to ensemble, and Weiss plays with warmed-sounding fingers. The temperature's definitely up by the end.

This is a composer's pensive set, with empathic, superlatively accomplished players. It makes me long to hear these guys jam after hours. Ambitions to record a set entirely of new originals always should be informed by this much thought.