By JEFF DAYTON-JOHNSON
October 2, 2009
Sign in to view read count 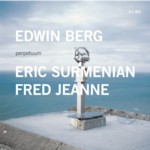 With Perpetuum, Dutch pianist Edwin Berg and his band mates enter an increasingly crowded field: to wit, piano trios that seem, consciously or otherwise, to worship at the shrine of Brad Mehldau. Any number of new-ish pianists on the scene have released records ranging in quality from good to excellent—Aaron Goldberg's Worlds (Sunnyside, 2006); Florian Weber's Minsarah (Justin Time, 2006); Florian Ross's Big Fish & Small Pond (Intuition, 2007); John Chin's Blackout Conception (Fresh Sound New Talent, 2008)—in this Mehldauvian vein. Not too populist, without being too studious either; compelling originals but including an ironic mix of covers spanning both the Great American and Great Rock Songbooks.

The surprising thing about this proliferation of piano trios is that Darwinian competition appears not to be winnowing players out of the pool, but instead raising the game of the whole lot of them. There are no slouches in this confederation, making it difficult—if enjoyable—to keep abreast of all the good music being produced in this venerated jazz format. The Berg trio is no exception in this regard, offering here a mix of strong compositions by trio members (particularly, "Tuna in Pink," "Libellule des sables"); a golden oldie (a somewhat awkward "All The Things You Are"); and a real oldie, in the form of a Bach prelude. (Berg's passion for the Bach material matches Keith Jarrett's, though he is less rigorous and more swinging.)

As for the post-jazz compositions, the trio covers Michael Jackson's early solo hit, "Ben," recorded just months before the Gloved One's premature death. (Miles Davis himself recorded "Human Nature," of course, but subsequently the Jackson covers have been rather thin on the ground: Frank Macchia led a sax choir through a tight "Working Day and Night" on his Saxolollapalooza (Cacophony, 2008), while Lester Bowie's Brass Fantasy did the same with brass for "Thriller" on Twilight Dreams (Venture, 1987).)

Most of all, Perpetuum is marked, as piano-trio records must be, by the pianist's playing; in this case, hard-working, intelligent, a little showy in the youthful way, and not afraid to swing.

Fred Jeanne's drumming is loose, playful and informal; on the loping "Amadeus First Dance," he sounds just like the percussive content of Ali Farka Toure's "Chérie," from his Red (Nonesuch, reissued 2005). Bassist Eric Surménian provides solid accompaniment and is well-recorded: a highlight is his solo on "Remembering You."