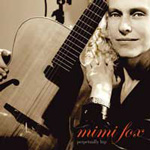 While the title track for Perpetually Hip was written for a friend, it also describes the composer, Mimi Fox, who wrote three of the songs that she interprets on this two-disc set. She works with her New York band on disc one, giving a standout performance that has everyone working cohesively and soloing with spontaneity. Straight-ahead jazz is certainly her forte.

When working with her quartet, Fox creates airs on her guitar that are as lovely as Diana Krall's sung melodies. When working alone, the guitarist possesses many of the qualities handed down by her mentor, Joe Pass. While virtuosic technique and originality constitute a considerable portion of her performance, Fox maintains an emphasis on the kind of lyricism that transcends genres. At the root of every interpretation, we find a focus on beauty.

Her straight-ahead encounters come with enough kick to fit comfortably into blues, rock, classical, or avant-garde circles, and her lyrical emphasis ensures that it would work. Here, however, we're faced with her straight-ahead interpretations, and that's a good thing. Fox was named "Rising Star in the 2003, 2004, and 2005 DownBeat critics polls. This year she has definitely arrived. Perpetually Hip proves that point beyond the shadow of a doubt.

Night and Day and all of disc two are performed a cappella. The guitarist takes her six-string amplified instrument through creative territory that's both easy on the ears and spurred by intellectual needs.

Many of today's top albums give us something to remember and something to enjoy. But we seldom want to listen to them repeatedly. With Perpetually Hip, Fox has given us a keepsake album that we'll enjoy listening to time after time, until the power runs out.

CD1 (with band): Perpetually Hip; The Song is You; But Beautiful; Saluting the Groove; Night and Day; While Bangkok Sleeps; So Many Stars. CD2 (solo guitar): Caravan; Polkadots and Moonbeams; On Green Dolphin Street; Alone Together; Medley: Someone to Watch Over Me / Skylark; When the Saints Go Marching In.