By DAN BILAWSKY
September 26, 2010
Sign in to view read count 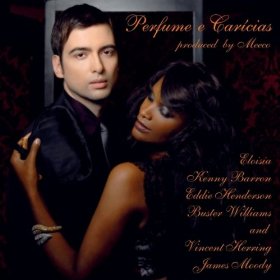 Everything about the music of Meeco speaks of subtlety, seduction and mood, from the cover art—with vocalist-lyricist Eloisia embracing him in what can only be described as a Calvin Klein advertisement-type pose—to the title itself, which is Portuguese for "Perfume and Caresses." The music, presented in easy-to-digest short tracks, with the longest performance clocking in at around four-and-half-minutes, works off of a less-is-more approach and maintains a noir-ish sensibility.

Meeco—who wrote the music and produced the album, but doesn't perform here— assembled an all-star cast for this session. Pianist Kenny Barron, bassist Buster Williams and trumpeter Eddie Henderson constitute the core group, and woodwind wonders Vincent Herring and James Moody add some finishing touches to a few tracks. Each member of the core group plays a crucial role in setting the stage. Henderson adds some nocturnal allure to the music, and his hushed solos have a Miles Davis-like intensity, though delivered in a distant fashion. Barron and Williams often maintain a symbiotic relationship, with the title track being the best example of their beneficial coexistence. This pair has the rare ability to be both cohesive and flexible at the same time; in addition, Williams proves to be an architect of the first order, as he creates and shapes his lines, which add to the music's weight and direction. All of this material is performed at a relaxed pace, and Barron is a master of space and touch in everything he does.

Eloisia's whisper-soft vocals—sung in Portuguese—melt like butter. No words are wasted and everything remains on the softer side. While the majority of these pieces have a slightly haunting and reflective quality in the performances, each track has something different to offer. "Pássaro Azul" is built on great chemistry between Eloisia, Barron and Moody (who adds a sunnier element to the song and makes his lone album appearance here on flute). Barron creates slow drifts of sound that seem to float through the atmosphere on this track. Herring's suave saxophone work adds volumes on the album opening "Cabelos ao Vento" and the alternate take which comes at the end. The songs on this album, like caresses themselves, are intimate moments to be savored.