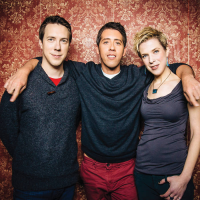 Perfectest Herald is another release that stretches the label "jazz" or even that of "creative improvised music" as it casts its spell and ultimately becomes completely enveloping.

9 Horses, the trio put together by composer and mandolin virtuoso Joseph Brent, consists of two other extraordinary players: violinist Sara Caswell and bassist Shawn Conley who seem just perfect for Brent's music. What is heard is a wonderful mixing of many styles and genres, including classical, jazz and folk which is both improvised and through-composed.

Brent's music is just bursting with emotion and its immediacy is partly what makes it so attractive and inviting. There is also a very strong feeling of story-telling which carries one along as the music puts its hand around your shoulder. Much of Brent's music is composed, but it does not sound like it most of the time in that there is always a little bit of the pulse connection which separates this music from "straight" classical.

A bit harder to quantify is the fact that this music, despite its story-telling, has the quality of "pure" music. Brent is not playing the mandolin, but rather music on what happens to be a mandolin. Caswell's violin (and Hardanger d'amore) breathes, speaks and sings, while every note from Conley (including his extremely accurate bowing) is alive.

The core of the album is the four-movement "Perfectest Herald" suite, which gets its name from Shakespeare's Much Ado About Nothing. Not to slight the surrounding tracks, but these four tracks are among the most life affirming one will ever hear. Music can be a very powerful force, and to listen to these pieces is to be refreshed and changed. Regardless of which emotional depths Brent drew on to compose these pieces, this highly emotive music touches and communicates the essence of what it means to be an alive, feeling human being.

9 Horses is a very special group from which there is no doubt more will be heard and Perfectest Herald is a very special creative work. The only way to fully understand its depth and complexity is to listen to it, and this reviewer feels very fortunate to have had that opportunity.