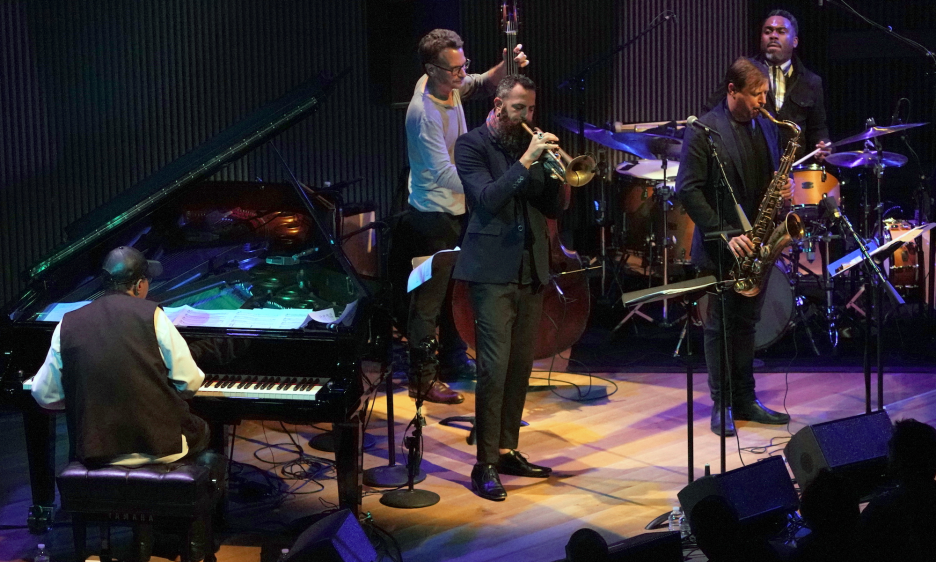 "It's a privilege to be here, especially in these challenging times," pianist Danilo Pérez told the audience, as the evening began, and then called his musical companions —Avishai Cohen on trumpet, Chris Potter on tenor and soprano saxophones, Larry Grenadier on bass and Nate Smith on drums. This evening marked the San Francisco debut at SFJAZZ of the Pérez, Potter, Cohen Quintet, a musical coalition embarking on its first tour. The group originated after Potter and Cohen joined Pérez's group Jazz 100 which was performing a tribute to Dizzy Gillespie, Thelonious Monk, Ella Fitzgerald and Mongo Santamaria. Pérez felt an affinity with Cohen and Potter, and they then proceeded to play together in a smaller group. For this new coalition, they brought original material to the stage.

Potter needs no introduction to fans of the music. His prowess on tenor and soprano saxophones has long been recognized, and he is a frequent performer at SFJAZZ and elsewhere. Cohen left his native Israel for the rough-and-tumble streets of New York where he struggled to establish himself as a trumpet player. Pérez gave him his first break, and Cohen then went on to join Chick Corea where, over the years, he gained both fame and notoriety.

A native Panamanian, Pérez was something of a child prodigy who studied classical piano at Panama's National Conservatory from the tender age of ten. At 20, Pérez won a Fulbright USA Scholarship to study in the United States. A Quincy Jones Scholarship followed and led him to enter the Berklee College of Music. At 24, Pérez became the youngest musician to join Dizzy Gillespie's United Nations Orchestra, a position he held until Gillespie's death. In 1993, he produced his first CD as leader, and triumph after triumph has followed over the decades, and the magnificent unit currently onstage is the latest manifestation.

The evening began with Pérez's "Beloved," a tune inspired by the Toni Morrison novel of the same name. Cohen took the lead before Potter came in with lush saxophone tones. Smith was gentle on his sticks at first before turning hard driving. After Pérez soloed, the band came in—the horns playing lush melodies—to end the tune. Next, it was time for a Potter composition: "Their Eyes Were Watching God," inspired by the famous Zora Neale Hurston novel. He tells us that inspiration came from Tea Cake, protagonist Janie's wild third husband, whom Potter characterized as "the most fun loving character in the book."

Potter retreated and gave Cohen space to solo. Grenadier then thumbed his bass meditatively as Potter and Cohen looked on from the shadows. They re-entered, and the tune turned rollicking.

"Innovation African," Cohen's initial contribution to the evening, began as Pérez plucked strings inside his piano while Cohen lightly clapped his hands and Grenadier played the bottom of his bass. Grenadier's bass riff took off, and Cohen's trumpet led the sonic landscape. Potter entered on soprano and soloed beautifully; a tender piano solo from Pérez followed, and the tune concluded on a soft note.

Next up was Cohen's tribute to poet Zelda Schneurson Mishkovsky. Born in Ukraine in 1914, Zelda's poems reflect her Chabad (an eclectic Ashkenazic Jewish sect) upbringing. "Depart from curiosity...Depart from Words," Cohen intoned. Sweet soprano and tenor from Potter were highlights. "Did you enjoy that?," Pérez asked at the tune's conclusion before swiveling into "Alternate Reality," his tribute to Angela Davis which began with a convoluted piano solo. Bass and drums brought the band back in, and this gave way to Cohen soloing then Potter with the trio behind him; Cohen then joined Potter. Pérez once more called the band, and the audience stood and applauded.

The encore, "And Still I Rise" (after the Maya Angelou poem) commenced with Grenadier's bass and ended with a few propulsive beats. After another standing ovation, the audience filed out.