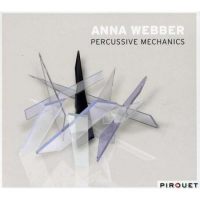 First she was a flutist, then a saxophonist, now an outstanding jazz and new music composer. Canada's Anna Webber follows up her debut, Third Floor People (Nowt Records, 2010), with Percussive Mechanics, a skirmish between contemporary composed music and jazz improvisation.

As a player, she has recorded with Stephon Harris's Blackout—Urbanus (Concord, 2009)—and has also performed with Jason Moran, Tony Malaby, and John Hollenbeck. It is Hollenbeck that is the touchstone for her compositions here. Webber plays with the conflicts between thoroughly composed music and jazz improvisation. Her pieces, like the title track, come across as automated, almost precise machine-driven compositions. Performed by skilled musicians, Percussive Mechanics is a tightly scored system of music. The beauty here is that her structures leak improvisation between the gears. The recording builds from its marimba/vibraphone and flute opening, adding clarinet, piano, and eventually the entire septet. Brief solos emerge as it gains momentum. Tension builds within the structure, eventually the orchestration giving way to the hoots and hollers of the players.

Webber's stratagem, to compose using layer upon precise layer to elicit both a disciplined sound and a new expression of controlled chaos, is the heart of jazz improvisation. Pianist Elias Stemeseder's simple and exact lines open "Sleeping Is Giving In" drums, percussion and meticulous horns then enter, following Webber's system. As the piece unfolds, the lines diverge and the music blossoms, with soloists spiraling above and escalating the music.

Album highlights include "Terrarose," with its whistled passage, and "Histronics," which opens with Webber and one (then two) drummers, harmonizing with her tenor saxophone. The stripped-down piece sums up her methodology—from the detailed discipline of writing, the human element and expression bloom.